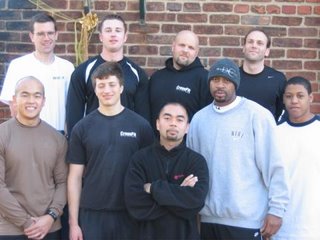 My “media Fitness” musings for today revolve around Mens Journal. Someone at City Fitness wanted to try one of the programs they publish, so I looked it over. Well, there is a bit of a CrossFit light vibe going on, but no problem. At least the program includes Squats, Deads, and Cleans. Problem is, there is no way someone can look at a picture, read two lines and then perform a decent Clean. The guy in the picture isn’t doing them right!

Anyways I spent about half an hour trying to explain the nuances: jumping/landing stance, elevation and momentum on the bar, arms straight, etc. Probably more info than the poor guy was expecting, but he practiced for a while afterwords. then i realized- half the picture is better than none. The more the mainstream hints at the real deal, a few will filter into actually learning it.