Nice work on Tuesday everyone. Before I get into the specifics I wanted to repost part of a comment that Reggie had made in the previous entry. It’s Reggie’s 2yr Crossfit Anniversary and here’s what he has to say:

“On a personal note, happy second CrossFit anniversary to…me! 🙂 In late November 2006 (when I started my first CFDC class…and there was *no* “Elements” class at that time), I weighed ~230-235 pounds. I *thought* that I was in shape then (I do recall that the kettlebell swings wore me out. And bear crawl? Puhleeze!)! Now, I’m weighing ~215 pounds (and I feel as if I dropped a lot of bodyfat in 2008). Regardless of my performance in Sunday’s deadlift (okay, I will admit that my form has improved), I feel a lot stronger than I did two years ago. But I am still a work-in-progress (and constantly “under construction”). I’m not “there” yet!

Props and thanks to “Coach” Tom, Russ, Jerry, Jen, Maiko, Fred, Karen, Steve O., Tuba Steve, Chris R., “Salty Hat” Chris, Stephanie (the double-under queen), Tom A. (my “masters” partner-in-crime), Ami (still “The Truth”), “Big Daddy” Joe, John F., John W., Sara (“strong and sexy”), Jason, “Red Viking” Alex, Brian (“B-dawg”) W., and to all of the others — too numerous to mention (and please forgive me if I did not mention your name) — who passed through the doors of Balance Gym and gave me a push (or a word of encouragement or an ass-kicking) whenever I needed it at CFDC. I could not have done it without you. 🙂

Sorry for the long-winded comment, but my point to anyone reading this entry is thus (at the risk of being cliche): If *I* can achieve it, then so can *you*!”

Getting Warm & Tearing Up Your Tailbone:

The following counts as ONE REP and ONE REP only!

With that in mind, our workout was: 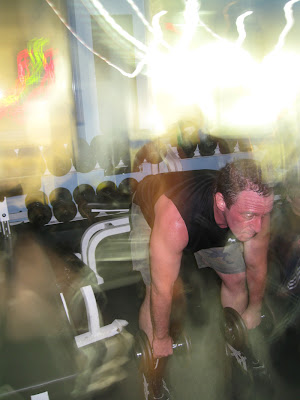 Apparently the camera setting was on “drugged-up poltergeist,” but I’m posting anyway ’cause sharing = caring. 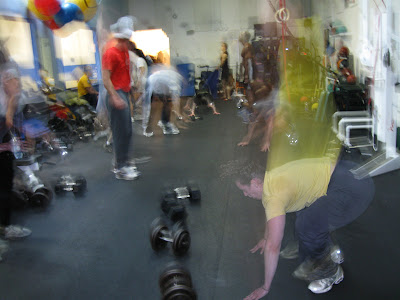 Not nearly as trippy as the previous pic…I think the camera was recovering. Remember, just say no to drugs. 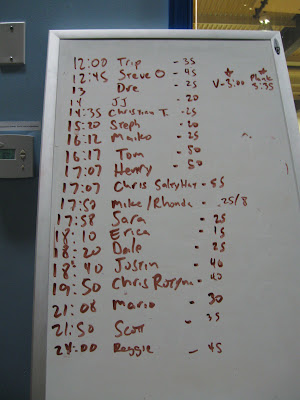 Finisher: Wearing Out Those Abs and Tearing Up Yo’ A$s: V-sit and Plank Hold Competition. 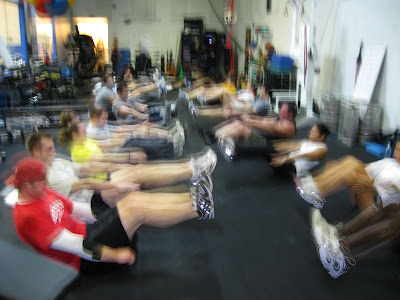 Ok, a lot better but still a little out there…no more drugs for the camera I swear.

Simple – hold the V-sit position as long as possible. Then we did the same with the Plank Hold. Dre killed both although Chris R. and Tom were close behind for the V-sit and Plank hold respectively. 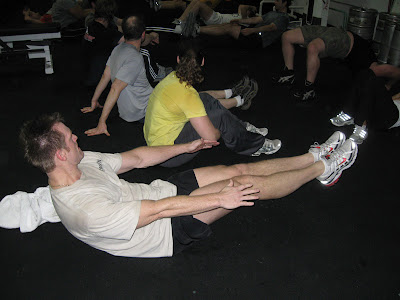 Full Recovery by the camera! Tom and Chris R. compete against Dre for the V-sit championship. 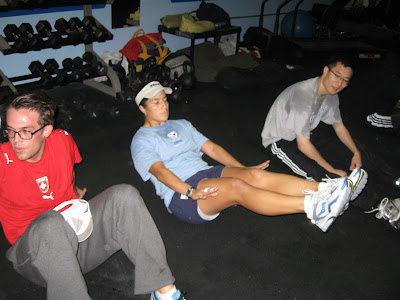 Tom brought some news about the CF Games 2009: the regional qualifier will take place in April. So which CFDCer is up for the regional challenge? Do we need to do a mini CFDC competition to determimne who will represent CFDC??