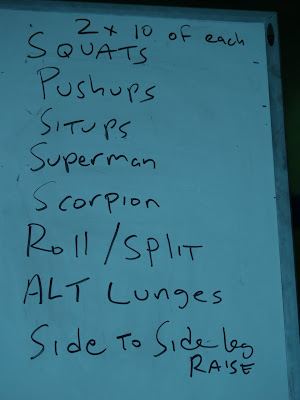 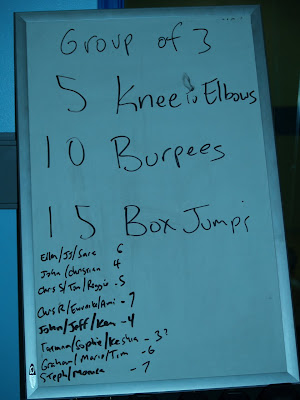 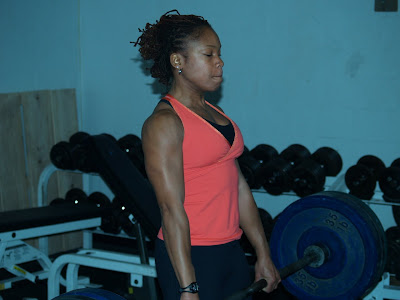 Another big showing for class on Sunday.   Elements brought in three first timers, along with a few regulars.   I like having a variety of experience levels in class, it helps for beginners to see the movements being done, and also the scalability aspect.  Sundays class demonstrated that in the WOD done at the end.    Teaching focused on the Squat, Press and (because they moved well) the Push Press.   Thrown in were a few sets of pushups and situps, before the main event.   The WOD was:

10 squats
8 push press
6 burpees
4 pullups
The beginners were given 8 minutes to complete as many as possible with good form, and with the understanding that they  should err on the side of caution when it comes to intensity. Pullups were jumping, and modifications to the burpees were included (but not needed).
At the same time, Chris W, Graham, Shelly, and Tim were given 15 minutes, and with no leeway in the intensity department (until I stopped Shelly, who was sick but still wanted to train).
The 10 AM class followed the format I think is the most effective, especially when athlete/clients are not getting in 5-6 sessions a week.  Basic strength followed by concise Met-Con, this time focusing on the DEADLIFT.   Rep scheme was 5-5-5-3-3-2-?-?, the last two attempts being possible doubles or singles (some stuck with 3), and the opportunity to max out.   Some very good lifts, and some very smart misses.   Attempting to Deadlift too heavy a weight with perfect form is pretty safe- it just doesn’t go!   Seeing people go 100%, but favoring spinal integrity over the ego is more rewarding as a coach than the big numbers.   that being said, some heavy weights got moved!   I noticed huge improvements in Reggies form, he and “Salty hat” Chris both pulled 405.   Ewunike and Ami both hit 215 for 3, and I believe Tom A and Mario also pulled PRs.
We finished up with a 15 minute burner for the Met-con junkies.  Teamed up, circuit through :
5 Knees to Elbows
10 burpees
15 box jumps
I want to commend everyone for the intensity shown on this, pushing to the end hard and with a lot of vocal support for each other.   Also noted was John and Christian being abandoned by Chris R, who wisely teamed up with Ewunike and Ami.   I’m sure it was nothing personal fellas!
Finally, where was Maiko?   She was off representing CFDC at the Performance Menu Olympic Lifting Clinic.  I dropped by to see Greg Everret Sunday afternoon, and witnessed Maiko Clean and Jerking 110 for a PR.   Both Greg and Aimee Anaya were very complimentary of her.   Hopefully she will chime in and share some of her experience.
Post Deadlift loads, general thoughts, Zone experience, recipies etc!
.
.