We had a couple of guests from Durham NC drop in for our Sunday class. 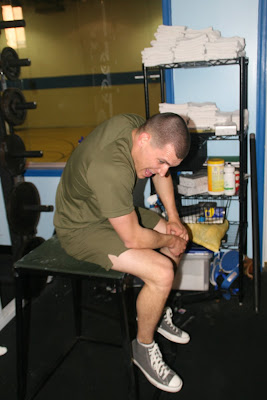 I think they had fun…

Continuing from where the class left off Thursday, we spent the majority of class working on the Snatch, specifically the Hang Power Snatch, with assistance from Fred and Mike of Capital Barbell Club. Thanks guys!! And now for some pointers on the Snatch. 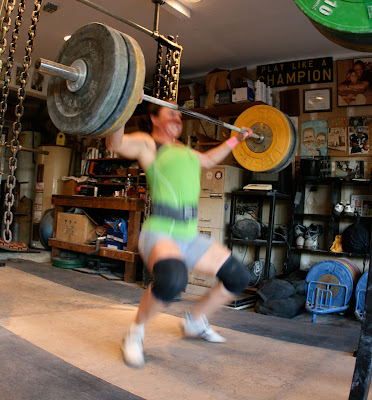 Aimee Anaya pulling herself under the bar. Notice how the weight is practically stationary as Aimee gets under it. Isn’t that an awesome shot?
Awesome photo courtesy of the Performance Menu.

As Tom said in class, we truly did speed through the Snatch Progression & Burgener Warm-up in class despite the length of the session. Check out the links below if you want to go over what was covered in class, but here are a few things to keep in mind:

1. Your feet are under your hips in the starting position; your squat stance is your landing position.
2. Keep your shoulders slightly forward of the bar in the starting position. Doesn’t matter if you’re starting in the hang position or from the ground.
3. Keep the bar in tight to the body throughout the entire movement.
4. Elbows high and pointed upwards for the third pull or before you pull yourself under the weight. As mentioned in class, pointing your elbows backwards will automatically make you swing the weight away from your body.
5. Oh, and remember the SHRUG!!!
6. Bail. Bail. Bail. Practice bailing. Equipment is replaceable, people are not.

Here’s a link to a video from the Crossfit website of Sage Burgener demonstrating the warm-up: Sage Demos the Burgener Warm-up

And…here’s a video with Coach Burgener coaching a group on the jump/transition. Keep a CLOSE eye on the attendees!! 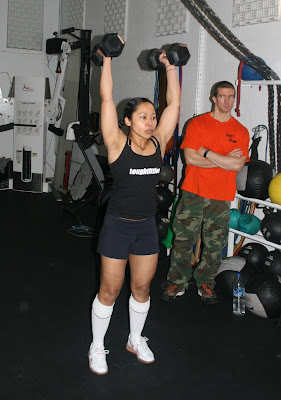 In groups of three, complete as many rounds as possible in 15 minutes of:

You know the drill by now – one person per station with no lapping. Tubs acted as assistant coach and helped folks get the movement right! 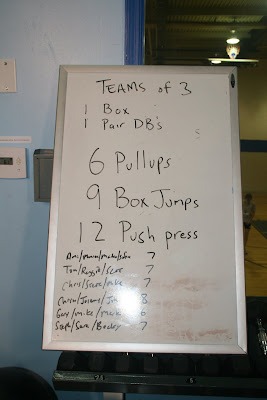 Scores are above but notice how there’s no loads posted? Please post ’em to comments!