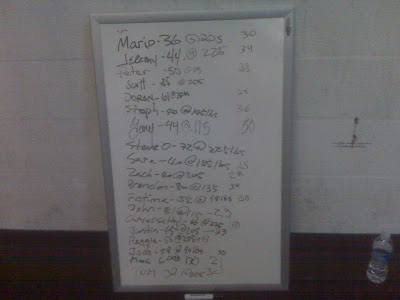 OK, after a week of computer issues and an upgrade, I am back on track. Luckily the workouts were unaffected by my lack of technical prowess!

A quick recap of Tuesdays session:

Then a Tabata Something Else minus the pullups (Squat, Situp, Pushup)

Thursday night focused on the kettlebell snatch. This movement is very different from the olympic weightlifting variations of the same name. The focus is not on a “jump and land”, but on the swing, and displacing the horizontal momentum to the vertical plane, as with a kipping pullup. The progression taught was:
Swing
Single arm swing
Single arm swing with a high pull
Top position down into swing
Put it all together!

Once we got the movement workable, everyone got the chance to do a 5 minute set with the appropriate kettlebell. We also worked in a 5 minute handstand/ HSPU skill session. The finisher was a burpee sprint ladder. Stating with 2 burpees and a court sprint, we increased 2 burpees every minute, with people dropping out as they couldn’t finish before the next round started. While Salty and Scott battled it out, Fatima passed everyone, but the three of them just missed finishing the round of 14.

COMMENTS: LETS GET A LIST OF EVERYONES NEXT GOAL. DOUBLE UNDERS, HSPUs, KIPPING, WHATEVER THE NEXT THING ON YOUR LIST TO CONQUER, LETS HEAR IT!