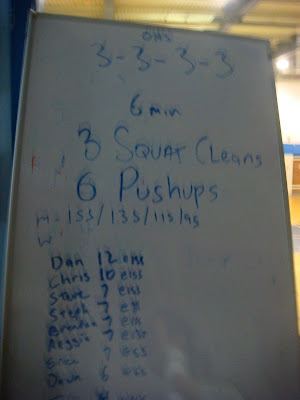 Overhead Squat 3-3-3-3
After a general warmup and a few light sets, we worked towards 3 RM OHS. Adjustments were made on shoulder and elbow position. Strong work overall, and improvements on position and depth were made. Remember, stronger is better, we want to add weight to the bar- but the focus should be on solid reps. If you are trying to rush the lift to beat bad positioning, you’ll probably loose it, and definitely not improve as quickly. For those who join Mike, Steve, and Fred in olympic lifting competitions, there is your time to do whatever it takes to make the lift. This leads me to a few points about the second half of training:

First of all, everyone attacked this workout like maniacs. Dan and Chris were at 3 rounds in the first minute! But here’s is the catch- there is a lot of room for improvement. Cleans in a metcon still need to be treated as a skilled movement. Good setup and technique shouldn’t be abandoned for speed. In fact, slowing down just a little to improve efficiency will pay off in the long run. The payoff may also come later down the road in terms of decreased risk of injury and greater training effect. Think about that, greater training effect. Unless you are in a competition at the moment, the whole point is to get the body to adapt and come back stronger. Physically and neurologically, correct movement patterns will have the greatest positive effect. Ingraining a sub par movement pattern at 155 lbs will come back to haunt you with 275 on the bar, no doubt. All that is not to say that technique was poor, just a reminder to focus on precision even under pressure. 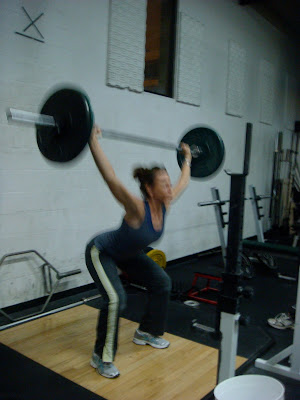 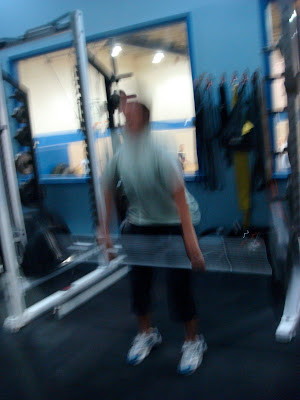 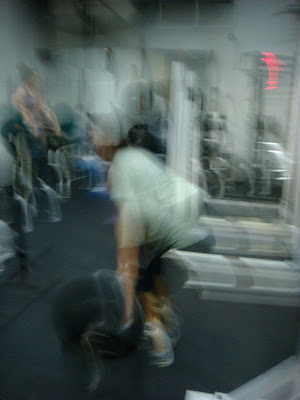 In the first pic, we can see Dawn hitting a triple @84 lbs. Her hips have come up early, so to keep the bar balanced she is really arching her back. Her next set she was able to keep her chest lifted a little more throughout the movement.

My poor camera skills worked out in our favor this time. The two blurry pics of Steph show position throughout the movement. In the “Stretch Armstrong” photo, her second pull (to launch the bar upwards) is coming from the hips, while her arms remain straight. She is jumping the bar up, when her arms pull, it will be to pull her body UNDER the bar. In the second photo, we see her setup and first pull. Notice that the ghost image has the same back angle. Steph stet up with her chest lifted, and kept her torso tight as she lifted the bar into position. Both of these pics are really good examples of avoiding common problems. Be sure that I will find some reason to pick on her soon though!