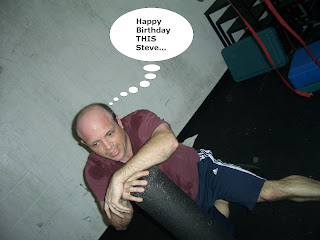 As promised, Steve O led his own birthday WOD on Sunday in place of Tom who was making his way back from FilFest in Miami. Surprisingly, the workout was only a two-parter. Unsurprisingly, the first part was the infamous Steve O “Leg Matrix.” 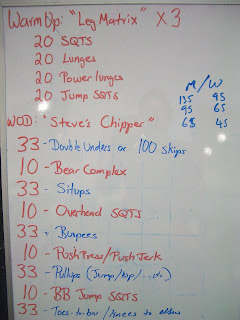 This was followed by a 9 part chipper workout. The chipper balanced 33-rep body weight movements with 10-rep barbell exercises. After a nice warm-up of double-unders, the first 10 rep barbell exercise was The Bear, an exercise made up of 5 individual barbell movements. That set the tone for a blurry downhill slide through the remaining exercises.

Tom will be back on Tuesday with lots of stories and ideas from FilFest. In the meantime, be sure to post weights used for the workout, as well as general thoughts and Birthday well-wishes (if you can ‘bear’ to!!)