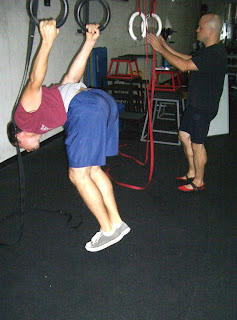 After Saturday’s fight went bad, Sunday saw CFDC take on a skill based workout that was purposefully slow and methodical. First, the class spent a little time back on the rings. We previously posted a link to an article on the gymnastic-based website “Skills and Drills” regarding all things ring-related, but it’s worth mentioning again – check it out HERE.

The class worked through the following progression of exercises: inverted hangs; slow lowering from the inverted hang; skin the cat; and, finally, both front- & back-lever attempts. 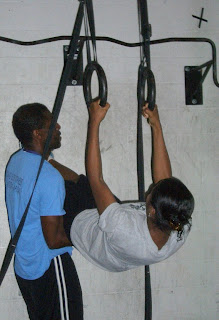 After that, the class broke into three groups to rotate through the following 3 skill exercises: Ring Push-ups, Kipping Pull-ups (or bar muscle-ups), and Double Unders, followed by a few obligatory rounds of L-Sits. 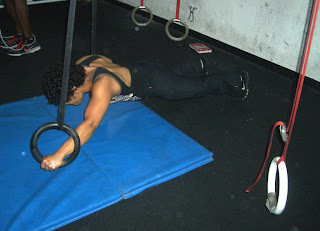 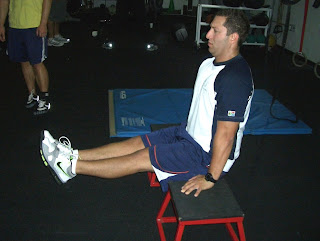 With a somewhat emptier than usual gym space on Tuesday, class was able to get in a nice long warm up before the two-part workout. After a few rounds of dynamic stretches, the class picked up some barbells for a few rounds of light-weight Good Mornings and “Cossack Lunges.” Weighted Good Mornings are often used as a supplemental exercise to Deadlifts and Squats, but at light weight, it can be an excellent movement for loosening up your hips flexors, glutes, and hamstrings for a few impending rounds of heavy Deadlifts. 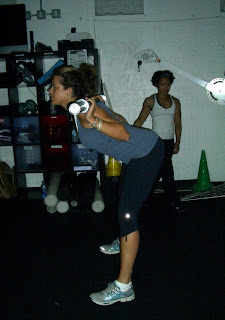 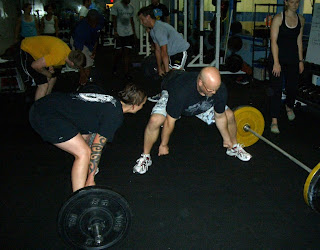 For the Sumo DL, feet are planted outside the lifter’s grip on the bar. Specific width of the feet is personal preference, but remember to keep your knees in line with your feet, rather than having the knees collapsing inward. Shoulders should start directly over the bar for the Sumo DL (rather than in front, as with the conventional DL). The hands should make contact with the thighs only after the bar clears the knees and the hips start to push through, near the top of the lift. 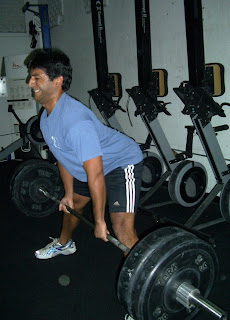 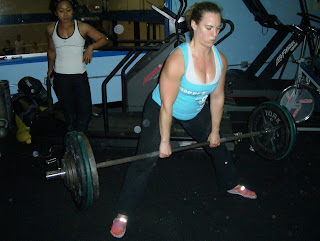 The Sumo DL is a great movement to have in your repetoir, but it will benefit some more than others. Good sumo deadlifters typically have long torsos relative to the legs and are good squatters, and this version of DL allows for a more upright back angle so that leg strength may be used more efficiently. (paraphrased from Coach Rip’s Starting Strength book) 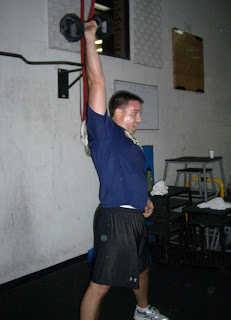 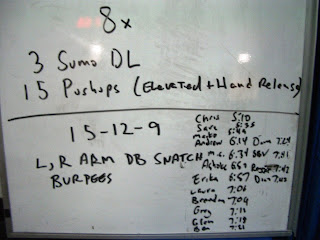 Great work by everyone in class – hammies and glutes might be a little tender today, so be sure to stretch. In the meantime, post loads for the Sumo DL, as well as the weight used for the Met-Con, to comments, along with any questions or other random utterances you might want to share.