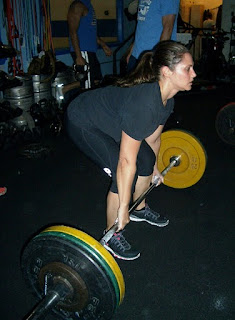 Tuesday night saw the return of the 5-rep deadlift, a workout the class had run through a mere two weeks ago (to the day). 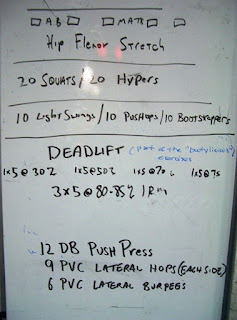 An important point to remember in the deadlift (as well as all squat variations and both Olympic lifts) is head & neck alignment. The temptation is to look up as high as possible, which of course makes perfect sense considering how often we’ve all been told to “look where you’re going.” However, in this case, excessive craning of the neck can actually lead to a loss of power as you take the spine out of alignment. Instead, keep the head in a neutral position relative to the spine (i.e., a straight spine) with a slight tilt upward so that the eyes are looking forward. 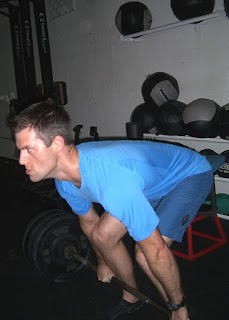 Once everyone was done with the heavy stuff, it was time for the quick finisher:
8 min AMRAP of 12 DB PushPress, 9 PVC side-hops, & 6 Bastards. 1 rep on the side-hops equaled over and back, and the Bastards (side-hop burpees for the uninitiated) were done over the PVC instead of a barbell. 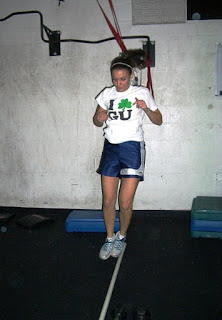 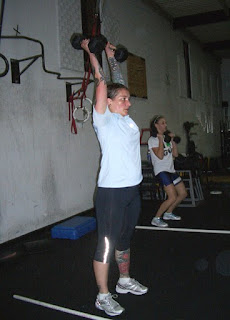 Nice work by all. If you’re interested in participating in the CFDC Nutritional Challenege, be sure to leave a comment or shoot me an e-mail at crossfitdc@gmail.com. For those who’ve already signed up: keep those answers coming! 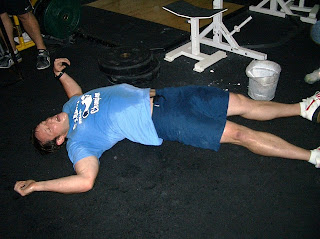