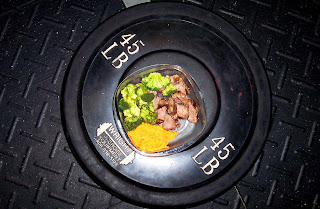 The CFDC Nutritional Challenge got off to a flying start Thursday night. As the class worked it’s way through the warm-up, one-by-one, those in attendance had their body-fat test done.

Once that was over, it was time to move on to a few base-line workouts, which will provide everyone with a yardstick to measure their progress after 30 (or 60) days.

First: Max Rep Pull-Ups
– These could be kipping, strict, or assisted (with two choices of bands).

Third: 3 rounds for time – 5 DLs & 10 Burpees
– Class was broken up into two groups, with the (for the most part) the faster finishers of the Mile Run going in the first group. Four weights were recommended, though individual scaling was, and always is, allowed.

There are still a few Nutrition Challenge participants who need to have their testing done; however, in the meantime, be on the lookout for your personalized nutrition recommendations – hopefully by the end of this weekend, but most likely by the beginning of next week (blame the Hopper!). These recommendations will take into account your answers to the questionnaire that was sent out and the numbers recorded from the base-testing last night.

Until then, rest up, and be sure to think good thoughts for those who are competing in the BWI Hopper this weekend.