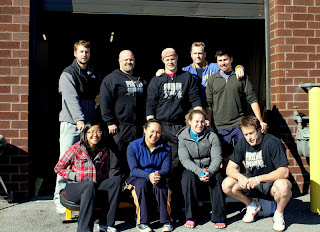 As Mike Choi was leading class back in DC on Sunday, CFDC’s competitors were already well into the second and final day of the BWI Hopper wrapped. Due to Sunday’s WOD structure, Team CrossFit DC would be working out simultaneously as at least one of the individual competitors. However, since the team got going first, it seems the logical place to start.

8000m Row.
This would be the final team event to determine the top 5 teams who would then compete in a final WOD for the podium. Each team was provided with one rower, the ultimate goal being to row 8000m as a team in the fastest time. Any team member could row any distance, dampers could be set as wished, and waiting teammates could help rowing teammates in and out of the foot straps. The only rule was that only the rowing teammate could touch the handle. Having a team stocked full of collegiate rowers would be ideal; barring that however, it was strategy and teamwork that proved to make the biggest difference across the board, something Team CFDC did extremely well. While on paper, this sounded a bit boring, it actually proved to be an exciting team-based workout, with Team CFDC and CF-Charlottesville running neck and neck to the finish line in the first of two heats. In the end, Charlottesville barely edged out CFDC for the win, but Team CFDC had the last laugh, finishing ahead of Charlottesville in the overall rankings, an extremely respectable 10th place.

7min AMRAP of 5 push-jerk (135/95), 12 KB Swings (1.5/1 Pood), & 7 burpees.
This proved to be a killer met-con requiring 7 minutes of all out intensity. It also proved to be a rather unique workout, as it introduced a new standard of burpee: the heel clicker – chest to the deck at the bottom, arms over head at the top (no clapping though), but to ensure that everyone jumped off the ground with sufficient height, the organizers required everyones feet to come together upon landing, producing a sort-of heel click. This new twist, however, did little to slow down Tom or Dan, who both handled the combination of movements without issue. 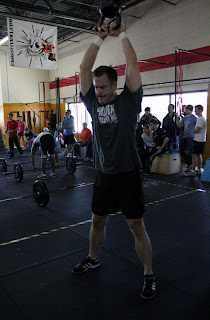 I wish I could tell you exactly what movements were involved in the final workout, and what the exact rep scheme was, but for the life of me, I couldn’t even keep track of it while it was taking place. However, I think it went something like this:
Squat Cleans, Ring Dips, Wall Balls, Pull-Ups, Snatch, and OHS.
I do know that each team member has to complete every rep of every exercise. I also remember that: a lot of teams struggled with the squat cleans (women’s weight was 135?), there were 42 wall balls, and three of the five teams DNF’d (there was a 25min time limit). Brutal.

After two days and 4 events, the top 10 men and women competed in a final chipper showdown to determine the podium. With 4 solid performances under his belt, Dan “Danimal” Samarov had worked himself into a solid 6th place. The movements were pre-determined, with only the rep schemes being pulled from the hopper (and hopefully Dan can help remember this one as well by providing any corrections in the comments section):
DLs, Push-Ups, Snatch, Ring Dips, Push Press, and Pull-Ups
Dan set-up face to face with Teff Tincher, owner of CF Fairfax and a seasoned CF Games competitor, and the two raced through the workout, with Jeff eventually pulling away during the pull-ups. Dan’s extraordinary effort earned him a 6th place overall finish for the weekend. 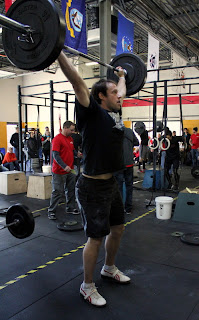 Congratulations to all the competitors, and many thanks to everyone who stopped in to cheer them on.