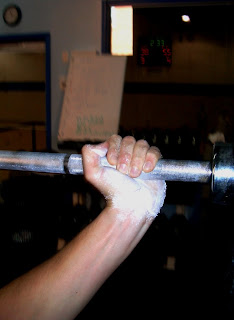 Sunday’s class devoted themselves, by choice or otherwise, to strengthening one particular lift: the Olympic Snatch. Oddly enough, however, no actual snatches were prescribed. Instead, class concentrated on a few “skill transfer exercises” for the Snatch: The OverHead Squat (OHS), and all three versions of the Snatch Balance (Pressing, Heaving, & pure Snatch Balance).

These skill transfer exercises are designed to help a lifter with one of, if not THE, hardest things about mastering the Olympic Snatch: learning to (1) exert continuous force on the bar while (2) maintaining a solid position under the weight and within the line of gravity. 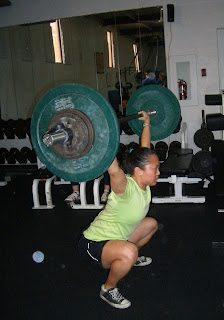 Continuous Force on the Bar: You may have heard Coach Brose or Choi state it before: “drive yourself under the bar.” What they mean is this: during the snatch (or any of the skill transfer exercises mentioned above), a lifter should be continuously exerting force upward on the weight as they descend under the bar. Especially in the full squat position, a lifter should be pushing up against the bar AT ALL TIMES to help control the weight. Center of Gravity (COG): The COG of a lifter’s body is the point at which all body parts, and thus body weight, are equally distributed. Think of this as your balance point. The force of gravity, unsurprisingly, on the COG is always straight down. Thus, a barbell, which has a fixed COG, does not change, regardless of increasing weight. So, why is it so damn hard to balance that bar overhead? 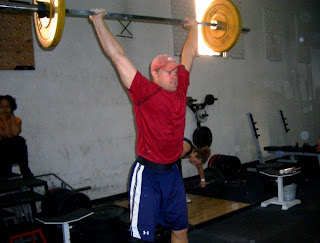 The problem is that the COG of a lifter’s body DOES change as the lifter changes position: At standing, the COG is just above the waist, near the navel. In a squat, though, the COG is (or should be) closer to the head, in the upper chest. Add a weighted bar in an overhead position to the mix, and the COG moves closer to the weight. Indeed, the COG in the receiving position of the snatch is actually above the lifters head. Thus, it’s “so damn hard” because a lifter is attempting to keep a weight that they can’t see in line with a COG that’s now located above their head! 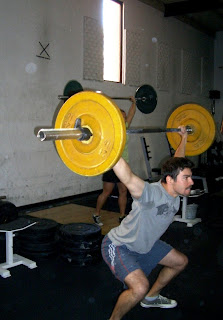 That’s a lot of explanation, but I bet it made sense to everyone in class on Sunday, who ground their way through a Weight Set of Heavy Snatch Balances followed by a Met-Con of high rep OHS along with pull-ups and box jumps. 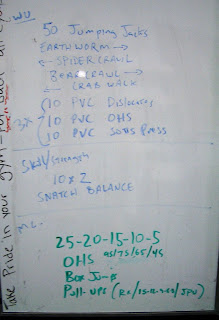 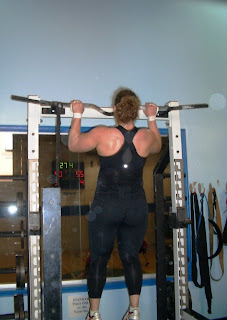 Great work by all. This was a tough one, and required a lot of concentration and effort. Rest up and refuel for Tuesday. And speaking of refueling, let’s talk about the Nutritional Challenge. Everyone’s gotten their general Nutritional requirements by now, and should soon receive some more tailored suggestions. In the meantime, be sure to fill out your Food Log. This is important – keeping track of what you eat and how you feel from day to day, and workout to workout, will help immensely. So get on it!