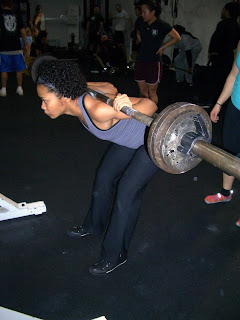 The flood gates opened Sunday morning and didn’t stop till CFDC had topped off at 25 people, including a number of new faces and the return of an MIA-CFDCer (or two). This massive showing was treated to a massive four-part, nearly two hour long class. After a rotating warm-up of 2min jump-roping, 2min 10 squats & 5 push-ups, & 2min 10 sit-ups & 10 KB swings, it was time to get down to work.

Strength Portion #1: Good Mornings & Deadlifts
Right off the bat, class was split into two parts, with one half tackling Deadlifts and the other half working on weighted, flat-backed Good Mornings. Good Mornings are a great accessory lift for strengthening your deadlift, and the flat-backed version is extremely similar to a Romanian Deadlift (RDL), which would prove poignant. 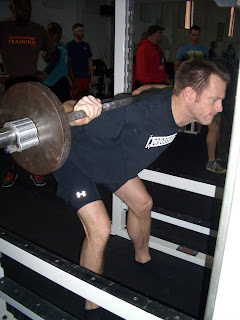 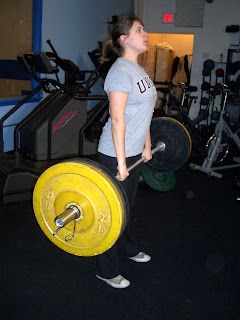 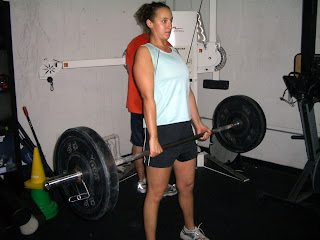 WOD 2: AMRAP in 12min of 25 DU and 5 burpees (single skips were allowed for those who haven’t quite mastered the DU yet).
After about 20 minutes of lifting, everyone got their first taste of a little metabolic conditioning. Class remained split, with one half performing the rowing/wall ball workout and the other half performing the DU/burpee workout. 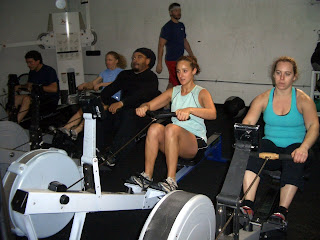 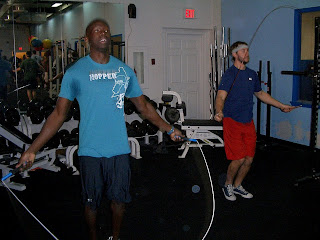 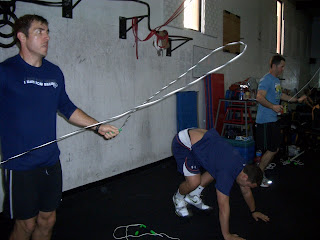 Strength Portion #2: Romanian Deadlifts (RDLs)
The RDL is a “top-down” movement in that the weight starts at the hips and lowers down toward the shins, rather than from the shins on up, as in standard DL.

NOTE: the key point for both the Good Mornings and the RDLs is that the back stay locked in extension while the hip extensors do the work. Rather than bending over at the waist, think about the hips sliding backwards as you lower the weight: 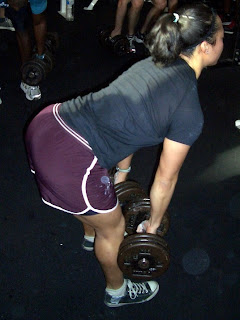 This will not only help stretch your hamstrings (giving you greater flexibility and allowing better movement during the deadlift), but will also emphasize using the hamstrings and glutes to do the lifting while your lats and core muscles are used for stability.

MetCon Portion #2: Switch!
Same MetCon workouts as above, but now that everyone had tired themselves out just a little bit more, the two halves of class got to switch and perform the whatever workout they hadn’t performed in the first round. 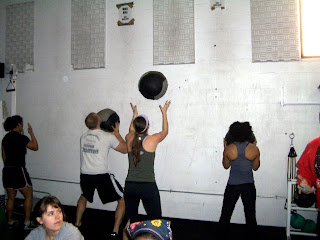 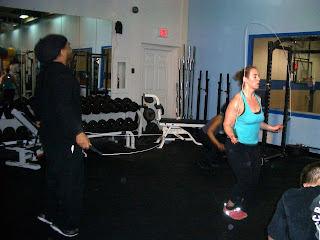 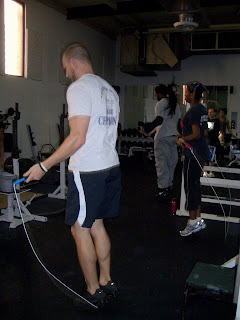 AND DONE! Awesome performances all around. Please post weights used and reps/scores for the metcons to comments.

Tuesday’s class will be held at the regular time (7:15pm). There will also be a special Thanksgiving class on Thursday! Class on Thursday will be at 9:30am at Balance – this is somewhat of a tradition, and if you’re in town and really want to earn that turkey, then be sure to show-up (class is at 9:30am only – no class at 6:30pm Thursday night).