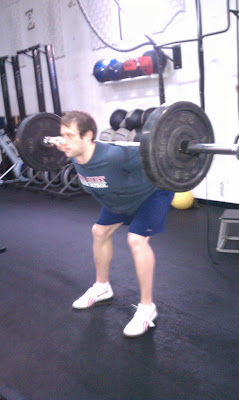 Good Mornings are excellent for building powerful competence in the squat,as well as the deadlift, by helping to develop strong spinal erectors (as well as glutes and hamstrings). The spinal erectors (“erector spinae muscles”) run the length of the back, from the sacrum all the way up to the base of the skull, and are responsible for keeping the head and spine extended while squatting and deadlifting, thus allowing a lifter to maintain a “neutral” spine position with the lower back naturally arched (rather than rounded).

Strength: Good Mornings 5-5-5-3-3
To set-up, place the bar on your upper back, slightly below the top of the traps, as if low-bar back squatting. Feet should be shoulder width apart and knees should be soft (not locked). From here, push the butt back as far as possible. The key here is to maintain a neutral spine while getting as much horizontal movement at the hips as possible. Focus should be on keeping a tight arch in the lower back and sliding the hips back into movement, rather than simply bending over at the waist. Lower to a point just above parallel (the exact point will depend on personal flexibility) and then squeeze the glutes and drive the hips forward to return to standing. 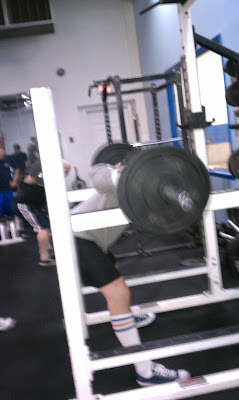 GMs will help teach how to use the hamstrings and glutes as movers while maximally flexing the spinal erectors for support. This is important for all lifts, but are especially helpful building solid squats. GM’s also give a good “prompt” for the deadlift. As such, following completion of the strength work, DLs were included in the metcon.

While everyone who showed up to class was having a great morning with the good mornings, a few CFDCers were out having great mornings of their own:

Tom A. was in California this weekend to take part in the NorCal 40’s competition, an invitational-type event where your invited IF you are between the ages of 40 and 49. Results haven’t been posted, but the events looked awesome, and Tom says that crew at TJ’s Gym put on a fantastic even and he had a blast, representing DC – and 49 other states by default – as the only non-Cali CrossFitter in attendance. Congrats Tom A.!

Meanwhile, resident Oly-coach Mike Choi was in NJ on Sunday for the 2011 Raider Olympic Masters Open weightlifting competition. Mike hit an 80kg Snatch and a 102 Clean&Jerk, including an epic re-try on his last C&J attempt after a side-judge incorrectly waived off his 3rd attempt. Mike’s 182 total not only earned him first place in his age and weight division, but also qualified him for the 2011 XXIV Pan American Masters Weightlifting Championships to be held in Savannah, GA this July. Awesome work Mike!!