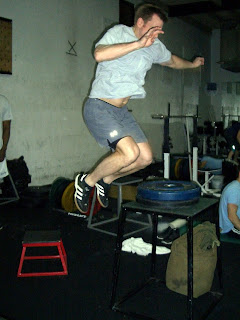 Round 1: 5x 3 Seated Box Jumps & 1 Depth Jump
While box jumps do help to further RFD, seated box jumps and depth jumps go even further. Box jumps allow an athlete to slowly build the needed explosive tension in their bodies as they crouch before jumping. Seated box jumps, however, demand that the athlete build that explosion as quickly as possible since their legs are completely de-loaded prior to the jump. 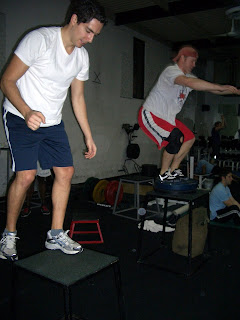 Depth jumps have a similar requirement, but instead of exploding from de-loaded legs, depth jumps require that an athlete really tap into the stretch-shortening cycle of their muscles by using them to absorb the impact of the drop from the box before rebounding quickly in the opposite direction for an explosive jump.

Round 2: 10x 2 Power Cleans
In rotation with 5-6 people at a bar, perform 10 sets of 2 power cleans, increasing the weight until a working weight is found for the last 4-5 sets. Remember, to reap the benefits of the clean, especially in a setting like Thursday’s class with it’s emphasis on neurological recruitment, you need to be getting full extension on each lift – that means hips totally open coordinated with a powerful shrug. 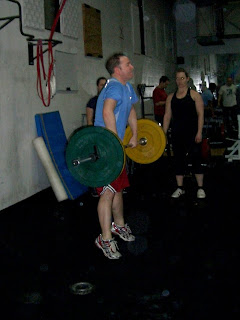 DC’s Most Primal Competition this weekend!

Good luck to Dan, Sebastian, Ethan, Tom and Julia who are competing in the DC’s Most Primal Fitness competition this weekend. This is a local, DC-based competition hosted by Primal Fitness which combines strength, agility, and conditioning into three cool events. For those interested in cheering on the athletes, the competition starts at 9:00 AM on Sunday at Primal Fitness (located at the intersection of M St., New Jersey Ave, and New York Ave. in northeast DC). As a heads-up, there is a $5 charge for spectators, though I don’t know how strict they’ll be after the first event is completed.


NOTE: We WILL be having both regularly scheduled classes on Sunday (9 & 10AM), but they will not run as long as usual AND we will be heading over immediately after the 10AM class wraps up. If you’re interested in carpooling, just let us know – the more, the merrier!
.
.