Congratulations to Julia, Tom A., Ethan, Mark, Dan, and Steve O., all of whom competed in the second annual DC’s Most Primal Competition this past Saturday. Primal Fitness puts on a unique competition combining pure strength a pure strength event, an agility event crossing-over between CrossFit and Parkour, and a straight up met-con, all packed into a single day. Scoring for the competition was based on points, with lowest total points taking the win at the end of the day. Here’s how things broke down:

Each competitor had two attempts to pull a 1 rep max deadlift. Women opened the competition, which meant Julia was the first of CFDC’s competitors to hit center stage. Julia opened with 295lbs and then set her sights on 315, a whopping 10lbs over her current PR (set just last week!). While she was able to get the weight off the floor and moving, it wasn’t meant to be this time around, however she sat comfortably in 5th place overall after the first event. On the men’s side of things, Tom A., the relentless masters-competitor, proved that age is just another number pulling 285lbs, while Ethan, competing in his first CrossFit event ever, stood up with a final lift of 401lbs! However, the second event was waiting with a nasty surprise for all. 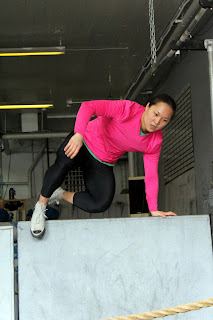 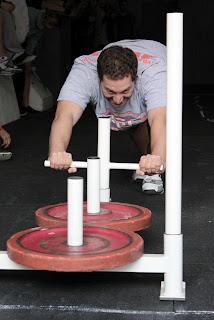 The event, run with two athletes at a time, opened with a ~25 yard up-&-back prowler push followed by a sandbag obstacle course where athletes carted one medium sandbag under one rope, over an obstacle, under a second rope, over a second obstacle, and then hoisted the bag up onto a 6ft platform. The obstacle course was then repeated with a second heavy sandbag before each athlete repeated the prowler push. Bar none, the last 20 yard prowler push simply pounced on all the athletes, setting legs a flame and stomachs a churning. All the CFDC athletes took on the workout with gusto, each of them tearing through the course as though they were practiced parkour-athletes, although Steve’s effortless looking bunny hops over the shorter of the two obstacles weren’t to be topped. Dan and Steve were both eyeing the podium after solid lifts in the first event (506lbs and 485lbs, respectively) and great runs in the second, efforts that put Dan in 3rd place overall and Steve tied for 5th. All the athletes were then given 30min to recuperate and recover before the final event. 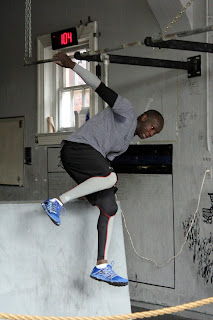 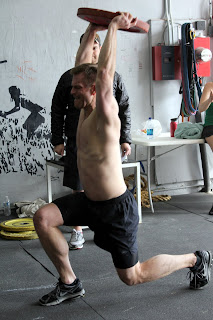 The final event of the day, run in 7 hearts of 5 athletes each, put everyone’s endurance to the test, really hammering lung capacity and core stability. A time limit of 15 minutes was placed on the event, so while athletes had to be smart about how they apportioned their reps, dawdling was definitely not a luxury. The already tight women’s competition became even tighter, going right down to the wire with three of the women crossing the finish line within seconds of each other! Julia ended the day with a solid finish at 5th place. Meanwhile, Mark was busy showing the men how things were done, setting a blazing time of 11:33 which held as the fastest time of the day until the final heat of guys, and was then only beaten by 3 of the 5 finalists. Dan and Steve O. both found themselves in the final heat alongside two familiar faces: Josh Courage, in town from Cali, and CFDC-alum and current CF Balance Competitor Ash Cope! The final mens heat lived up to expectations, remaining a tight race till the very end. When all was said and done, Dan held onto 3rd place to close out the day with a podium finish. 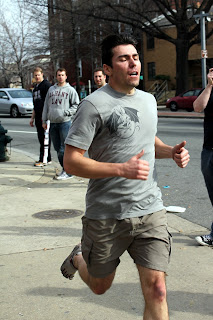 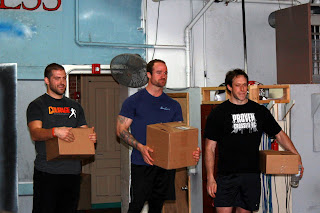 Congratulations are definitely in order for all those who competed. Also, many thanks to the legion of CFDCers who came out to cheer, including Sara, Erica, Amelia, Ben, Oren, Peter, Stephanie, Mary Catherine, and Sebastian (who was unfortunately forced to sit-out the competition due to a wicked fever). I think all in attendance would agree it was a fun event, well organized and run, and I’m willing to bet that the competition bug has bit a few more of CFDC’s athletes.