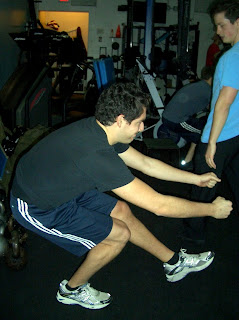 After a run of programming featuring heavy bar work, the barbells have been conspicuously absent from class recently. Instead, focus has shifted towards met-cons and, more importantly, skill work. I say more importantly because while we can often fit conditioning in with our strength workouts, skill work is slightly more complicated. The toll heavy lifts take on our CNS (Central Nervous System) often makes coordination-demanding skill work somewhat of a wasted effort when worked in combination (unless you are already proficient in that skill-based movement). With this in mind, Thursday’s class started things off with no barbells and not just one, but two, skill movements 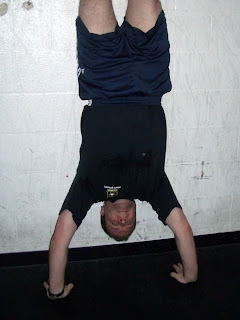 HSPUs were scaled to handstand holds. Pistols were scaled to assisted pistols with a band (suspended from the pull-up bars) or using a box. When using a box for the pistol squats, remember not to simply collapse; the box is meant to assist in stopping the eccentric motion (lowering) and allow you to gather strength for the concentric motion (rising). If you find yourself collapsing on to the box repeatedly, move to a higher box, and concentrate on controlling the movement. 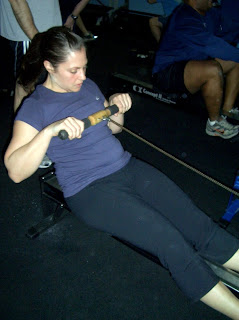 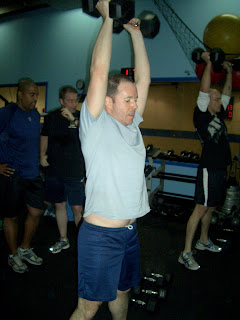 Top number was two total rounds plus half a set, if I recall.

Great Work everyone. Be sure to check out Yesterday’s Post regarding next Tuesday’s after-class viewing party of Cupcake Wars at Breadsoda in Glover Park – we’ll all be out cheering on Doron and Sticky Fingers.

Also, if you didn’t get a chance to check out the write-up on the DC’s Most Primal Competition, you can jump to the post HERE (or simply scroll down the page). However, Dan Samarov left some great thoughts, along with very valid points, in yesterday’s comment section, and with his permission, I am inserting them here:

Dan Samarov said…
Just a little recap of this past weekends events. First off thanks for all the cheering and encouragement at the Primal competition! Everyone did absolutely fantastic from the CFDC crew, it was a blast watching you compete. I had a great time at the event and like most CF comps, definitely learned a lot.

1. For whatever reason I have a bit of stigma when it comes to the whole videotaping thing… seems a bit narcissistic. That being said, a friend recorded my deadlift at the event and it was the first time I’d seen myself doing that lift… and it was ugly. I think that there is definitely something to be said both for getting honest feedback from your fellow CF’ers, but like the saying goes, a picture is worth a thousand words. So, from now on, when possible I, and I think it would certainly be valuable for others, will record myself on the heavier lifting days.

Overall though, I was happy with the weight, definitely think I could’ve tacked on another 10 to 20lbs. However, before I try that, I’m going to work on getting my form right.


2. The obstacle course event was a lot of fun. Definitely not my wheelhouse but had fun doing it. In the future would be great to work the prowler sled into wods.

3. Last event was definitely a good one, tough (for me at least) physically and even more so mentally. It was definitely one of those events where you just had to keep pushing. I actually enjoy running but it certainly is not my strength, that being said, in the context of a competition it’s important to capatalize in areas where you can to try and make up ground. For this one I really needed to crank through the burpees and the overhead lunges, but just didn’t quite put it together. In exactly these types of situations I think its critical to keep on going, you might think you have to put the weight down, or ease up a bit, but more often than not you actually have a lot more in the tank than you think. Training yourself to push through in these types of situations becomes really important, and in training with a group of people really taking cues to not put the weight down and keep going, or picking it back up after a three count is a really useful mental excercise.

Anyway, my two cents, thanks again everyone! 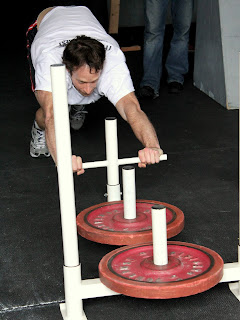