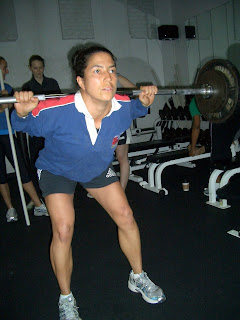 Between the 11.3 Qualifier workout at the NoVa Open, Olympic lat the Cap City Open, and a Sunday morning full of barbell-based exercises, it was a weekend of nothing but lifts.

We did an in-depth review of Good Mornings back in February, including their role in strengthening squats and deadlifts, and proper set-up and execution. 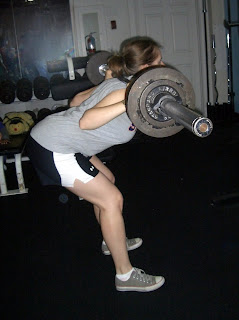 There was one point that was made that I’d like to revisit to add emphasis: “Lower to a point just above parallel (the exact point will depend on personal flexibility) and then squeeze the glutes and drive the hips forward to return to standing.” Specifically, that driving of the hips should be a quick and powerful, yet controlled, movement – think of your hips as a spring, and after you’ve loaded up the spring by slowly driving your hips back, unleash and let the tension forcefully drive your hips back to center. Just because GMs are best left for skill/accessory work (i.e., best left out of metcons), that does not mean the entire movement must be slow and methodical. 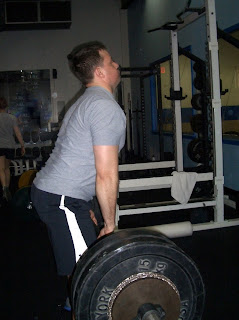 Why the term “Speed Singles”? In part, the emphasis was on rotating people through their lifts quickly and efficiently, aiming for a lift every 30-45 seconds/person. However, the greater part of the emphasis was on explosive drive to the standing position, SO LONG AS form and technique were not compromised. To accomplish this, working weight was set as roughly 50-65% of everyone’s 1RM DL (the goal was to avoid weights that produced slow, grinding lifts). 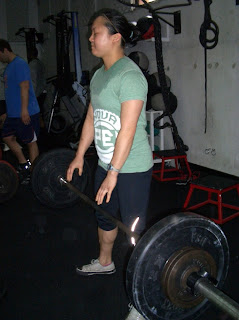 Of course, if you can find a bar that will pick itself up, that’s even peachier!
Finisher: Annie-esque Partner metcon (now thusly dubbed “Easter Annie”) 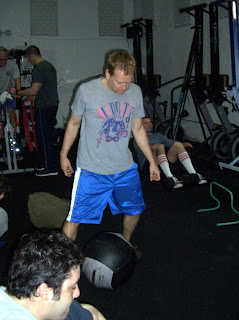 Great work everyone; please post questions, clarifications, and weights used to comments. Also, congrats to Mike, Sara and Reggie for their lifts on Saturday at the Cap City Open – be sure to check the blog later on for a write-up on their final totals and placement.