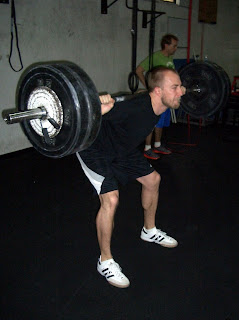 And so ends our month of of H2G2=Hitchikers Guide to the Galaxy themed blog post titles (feel free to suggest more themes for coming months). Additionally, Sunday marked the end of the 6-week CrossFit Open Qualifiers. Congratulations to all those who competed, and best of luck to all those moving on to the Regionals!
To celebrate, it was decided that everyone’s posterior chains needed some work, and so after another round of running drills down on the court, it was time to get hamstrung! 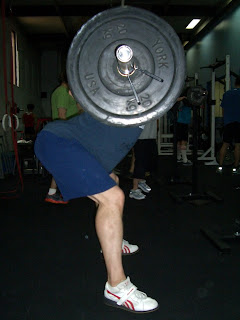 After 2 x 10 sets of Butt-2-Wall stretches, everyone moved on to weighted Good Mornings. The goal was to work up to a 3 rep max effort set with one caveat: no sacrificing form – while it’s natural that at the boundary of maximum effort, form will begin to degrade, there are some lifts where it’s just not worth it. Good mornings are one of those lifts.

Take a minute to review the in-depth post we did about Good Mornings back in February of this year. 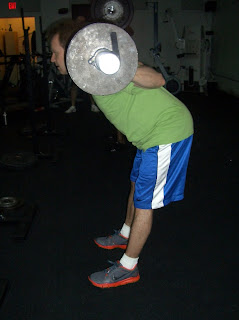 One point that’s worth repeating is this: GMs are about hamstring flexibility and hip mobility – i.e., the movement is governed by the amount of hip travel that your hamstrings will allow. Trunk flexion (bending at the waist) plays NO PART in a GM! As such, when you’ve pushed your hips back as far as your hamstrings will allow, STOP; any movement past this point will simply be bending at the waist, which is neither productive or safe. 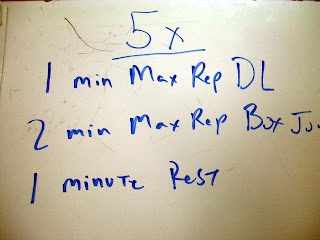 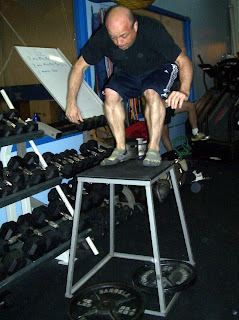 The board says it all. The need to stretch afterwards was more than apparent. 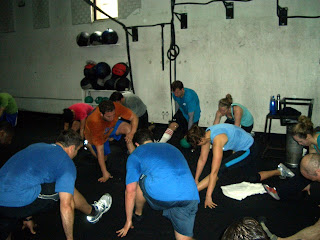 how much blue clothing can you spot in this picture?

Be sure to drink plenty of water tomorrow and hit the foam rollers – recovery is a necessary part of working out, so put in the time and do it right.
.
.