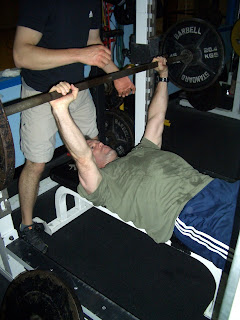 It’s been nearly two months since we last hit the bench, but the lifts we love never truly leave us.

Back in September of last year, Tom posted a video by Coach Mark Rippetoe entitled “Intro to the Bench Press Pt. 1” (spend the 3 min. it takes to watch the video to reacquaint yourself). For our purposes today, we’re more interested in the second video (below), “Intro to the Bench Press Pt. 2,” and especially the second half of the video (~1:50 & onward) where he talks about proper positioning of the elbows and the overall impact that positioning has on the lift.

While there are a number of cues to help stop the elbows from flaring up during the bench press, most produce a similar result: engaging the lats. During the drive, or concentric, portion of the bench press, it is important to keep the lats engaged (pinching your shoulder blades together).

A good cue to engage your lats is to think about bending the bar, circus-strongman style (as Tom is actually doing with the yellow pipe in the above pic). This causes the elbows to drop down in tighter to the body while putting the focus of the cue in the lifters hands, which can be seen in front of them (as opposed to thinking about the lats which are out of sight behind a lifter).

At left, you can see Kenna during the 1st rep of her last set – her position is very good, with her forearms perpendicular to the floor and her elbows tucked. At right, you can see her on her 3rd rep of the last set – as she gets tired, she allows her lats to relax, which results in her elbows flaring up and out to the side, forcing more of the work onto her shoulders (rather than pecs, lats, and then triceps). After cuing Kenna about keeping her lats nice and tight and adjusting the weight, she hit the bench for 3 more presses, all with great form and looking like the picture at left.

Remember, often times its the simple things that result in big gains – more work and more weight are NOT always the answers. 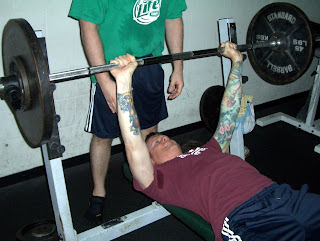 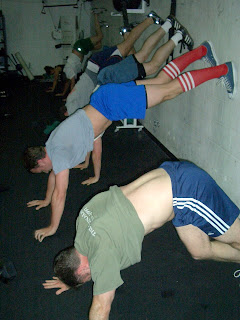 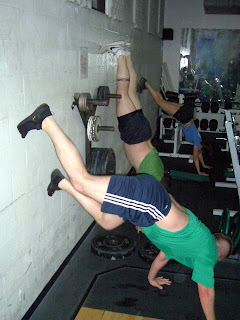 wall walks – not quite dancing on the ceiling, but not quite bouncing off the walls…
results: 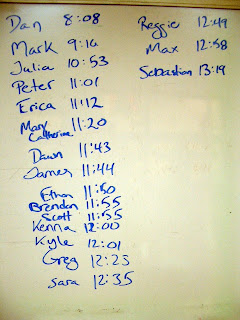 Great work, especially in handling a new movement tossed into the met-con. Rest up, stay dry, and we’ll see everyone on Thursday.