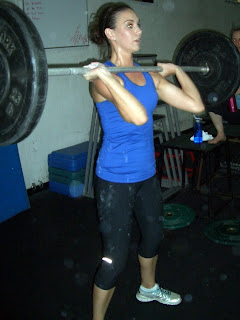 While most of us have a firm grasp of the overhead movement (with a bit of nitpicking here and there about tightening the glutes to tuck the hips), the Clean remains an age-old nemesis for many of us, and one which has received ample coverage in the past (see specifically Coach Mike Choi’s Points of Review for the Clean). With three sets of eyes watching and helping last night, there was dramatic improvement in everyone’s Cleans. However, we are going to use the majority of today’s post for some review and terminology clarification.

Triple extension movements consist of exercises that apply explosive force with the feet against the ground, movements where you will often hear a coach remind you to “push the floor away” or “drive into the floor.” These movements, which include the Clean, Jerk and Snatch, are so-called due to the use of the three major posterior-chain joints – ankles, knees, & hips – and the manner in which they are forcefully moved from the flexed to extended position. Failure to fully extend all three joints, and thus not achieve triple extension, reduces the amount of power imparted to the weight. This becomes a significant factor when we begin talking about the “three pulls” of the Olympic lifts.

Both the Clean and the Snatch can be loosely thought of as three movements which, at speed, are blended into one seamless lift. Following, will discuss each of the three movements, or pulls as they’re known, and the common faults that seem to accompany each.

First Pull
First Pull = from the bar’s starting position on the floor to the top of the knees
Setting up is key to a successful First Pull, let alone a good Clean; your hips should start lower than they do for a deadlift, allowing the chest to stay up and out, and your feet should be just under the hips (closer together than they would be for a squat) with the knees slightly flared out to allow for a more vertical bar path. 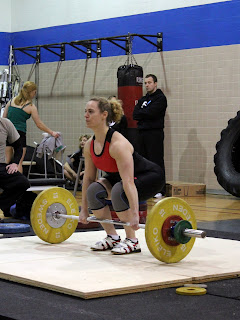 To execute the First Pull, take a deep breath and begin to pick the bar up by extending the legs at the knees while driving through the heels, making sure the hip and back angle rise at the same rate. Note that while the First Pull should be comparatively slower than the Second or Third Pulls, it is not intentionally slow.

The only real common fault associated with the First Pull is allowing the hips to shoot up. Our extensive use of the deadlift as CrossFitters means that we have trained our bodies to default to a deadlift position when picking weight up off the ground. This is generally a good thing; however, allowing the hips to rise too fast during the First Pull of a Clean will result in the weight getting out in front, away from your body, during the Second Pull (this leads to host of scenarios occurring through the Second and Third Pulls, none of which are optimal).

Second Pull
Second Pull = from the top of the knees to the crease of the hips
This is where the bar really gets moving, and is completely dependent on the explosive power generated by the triple extension (discussed above). In hitting full triple extension, you will significantly increase the velocity of the weight. In short, you want to impart as much power and speed to the weight as possible so as to allow the bar to become as weightless as possible for as long as possible. To execute the Second Pull, think about violently extending the legs, launching the body up on to the toes, and shrugging the shoulders while keeping the arms locked. This will utilize the entire body to get the bar moving. 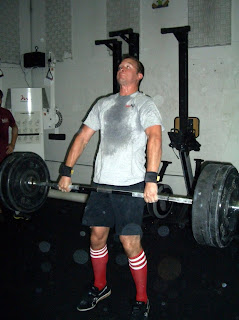 Sebastian on Tuesday night just before completing triple extension – his ankles, hips and knees are all in the process of extending while his shoulders are just beginning to shrug; his arms however, are STILL locked, as they should be.

This is where the Clean usually breaks down for most. The biggest fault, and by far most common, is pulling early; i.e., the arms begin to pull the weight before you’ve achieved a full triple extension. In doing so, you’re taxing your biceps by pulling on the weight and therefore “muscling” the weight up. Additionally, pulling early is often the cause of the second most common fault in the Second Pull, and that is not reaching full triple extension. In other words, by pulling early, you often fail to fully extend the ankles, knees or hips, though it is most often the hips. It is possible to pull early and still hit full extension, but the power imparted on the bar will be far less than it otherwise could be. Let’s simplify early pulling this way:

Which do you think will allow you to move more weight for longer periods of time?
One last common problem to be aware of during the Second Pull is not keeping the weight in constant contact with the body. By not keeping the bar in close and against the thighs, you will negate much of the power generated in the Second Pull, as well as to set yourself up for problems in the Third Pull.

Third Pull
Third Pull = from the crease of the hips to the finished position
(“finished” meaning the rack position on the front of the shoulders for the Clean, or overhead for the Snatch)
This is the point when the bar should be somewhat floating in mid-air as you move in to position to properly receive the weight. To properly execute the Third Pull, begin to bend the arms (only AFTER you have hit full triple extension), keeping the elbows high like a scarecrow, and pull the bar up your body. The path of the bar path should remain in close against the body. As the bar passes your sternum, the elbows will drop and rotate around the bar, finishing out in front, with the upper arms parallel to the floor and the bar in the rack position. The process of the pulling the elbows around is extremely fast and is often described as “whipping the elbows” around the bar. 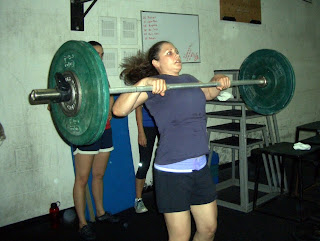 Andraea on Tuesday night in the process of completing the Third Pull – she has kept the bar nice and close, pulling the weight high, and is beginning to “whip” her elbows around the bar. Notice too that Andraea has also unlocked her knees in order to pull herself under weight slightly and absorb the catch. 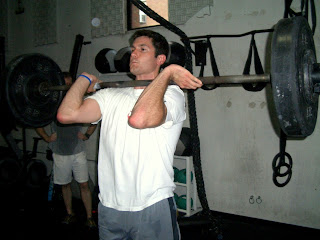 Scott on Tuesday night after completing the Third Pull and with the bar in the correct rack position (i.e., with the bar in his fingers, weight on his shoulders, and elbows up high.

There are two common faults associated with the Third Pull. The first is front or reverse curling the bar – keeping the elbow low and simply using the biceps and forearms to curl the bar into the rack position. If at any time during a workout with Cleans, your forearms begin to get tight and burn, rest assured you are front curling. The second common fault is catching the bar in your hands in front of your shoulders. There are a number of causes, but the most common are allowing the hips to shoot up early in the First Pull and/or not keeping the weight in close to the body during the Second Pull. Each of these faults often results in the bar ending up too far out in front of the body. Thus, instead of falling into place on the shoulders at the end of the Clean, the bar ends up falling slightly in front of the shoulders, requiring you to catch the bar in your hands before moving it back onto your shoulders. Sore, achy wrists are a good indication that you are catching the bar with your hands rather than your shoulders.

One final point: It doesn’t matter whether your using a barbell or a set of dumbbells when doing your Cleans, the movement is the same, from First Pull to Second Pull to Third Pull. The only difference should be in the receiving position, where your hands will be in a neutral grip (with palms facing the head).

Reggie during the Met-Con portion of Tuesday night’s class – the weight is resting on his shoulders in a neutral grip position, but his elbows are still well in front of the weight, just as they would be if he had cleaned a barbell.

That’s a lot of information, I realize, but it’s extremely important, and will help the next time Cleans come up in class. If there was one last piece of advice I could give, it would be this: Don’t get frustrated! The Olympic Lifts are a game of patience. It takes patience and practice to not only learn the movement, but adapt your CNS to specific neurological recruitment pattern required during each of the three pulls. It will come, I promise – just ask Andraea, who up till now pretty much loathed Cleans but was really hitting her form on Tuesday night and enjoying it to boot!

Great job everyone. The comments over the past few days have been awesome, so keep it up. I would love hear what weights everyone worked up to, as well as field any questions or clarifications anyone might have about today’s post/Tuesday night’s class.