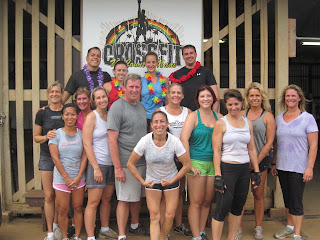 A busy weekend for CFDC which saw its membership scattered both near and far. As you can see, some of us (namely Ben and Erica, pictured above at CrossFit Up Country Maui!) got the better bargain. Meanwhile, back on the mainland, things had been further divided between CFDC headquarters in Dupont Circle and George Mason University’s Field House Complex for the Mid-Atlantic Regionals.

Since Tom and Sara were judges at the Regionals for the weekend, and seeing as how I was forced to travel to Wilmington, NC to help re-salinate the Atlantic Ocean, Mike Choi stepped into the void to help class work on some Olympic lifting.

Class was divided into 2 groups: one group of more experienced lifters – who worked up to 70% of their 1RM – and one group of lifters new to the clean or who felt their clean still needed more attention. This second group worked specifically on the First, Second, and Third Pulls making up the clean, as well as triple extension, which was fantastically convenient considering last Tuesday’s class and follow-up post.

For this met-con, class headed down to the court where a 25M x 25M square was set up with stations at each corner. Mode of travel from station to station was either bear crawl or broad jumps. In the end, it looked like this:

Nice work everyone. Congrats to Dan Samarov for a great run to the Regionals. From what I can gather, the Regionals were highly competitive, giving even the most seasoned Games veterans trouble. Dan did exceptionally well, including a max effort 225lb thruster! I’ve asked Dan to do a short write-up on his thoughts regarding the Regionals competition, and hope to post that later in the week. 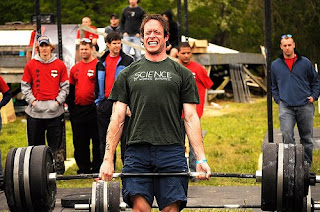 Awesome work to everyone, both in class and out of class this weekend. Speaking of which, sounds like class took advantage of the substitute teacher, receiving a free pass on the blourpees (thanks to Kenna for coining the new term!) In keeping with the generous spirit (and seeing as how there aren’t any pics from class this weekend), will give everyone a reprieve from requiring specific people comment. INSTEAD, I’m going to set a minimum of 15 comments from different people! 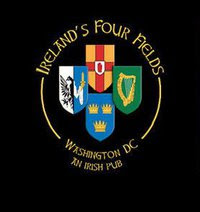 Also, don’t forget to RSVP for the CFDC Social this coming Friday at Ireland’s Four Fields. If you didn’t receive the evite, let me know and I’ll make sure you’re e-mail address is on the distribution list. The more the merrier – besides, it’s great to see what your fellow CrossFitters wear when they’re not all hot and sweaty.