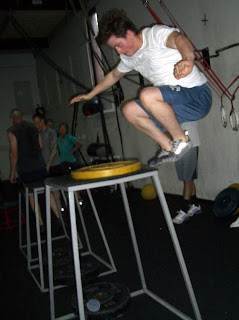 Starting position was jumper’s choice – either static (feet planted) or dynamic (lifting the feet and rocking back slightly to initiate). 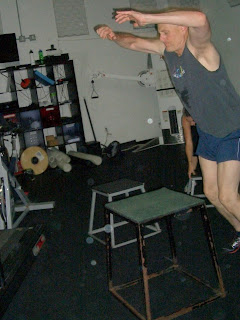 Box jumps require you to concentrate on exploding upwards from the low squat position. Oddly enough, this is something you should be concentrating on every time you squat, and it was no coincidence that the seated box jumps preceded heavy front squats. 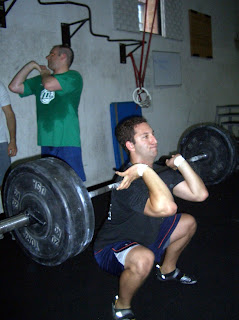 It’s imperative that you not initiate your front squats by bending you knees first. This puts the weight forward of your COG (Cx of Gravity), causing you to lean forward which means you will end up holding the weight with your hands, not on your shoulders. Initiate all squats by tilting the hips back first, and then sit down keeping your torso as upright as possible. Keep the knees driven out and elbows driving up at all times, and you’ll soon find yourself a master of the front squat. 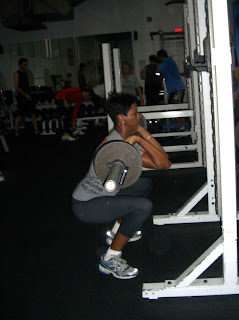 Check out Dian rocking the front squat position! Dian’s flexibility has come a long way, due in no small part to her adherence to form and smart-decision making regarding appropriate weight.

Remember, flaws in your form will limit your ability to either lift more weight or lift for more reps, thus inhibiting overall growth in your strength and conditioning. Take the time to fix flaws. It’ll mean less weight for now, but more weight, more reps, and more strength later. Don’t be satisfied with insufficient form. 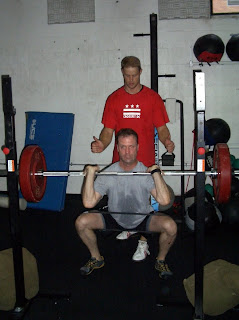 That’s Brendan above using bands to help stop his knees caving – bands automatically cue a lifter to drive the knees out through the entire squat. Correcting form requires cutting back the weight – don’t attempt to correct form flaws at max effort weights! It’s humbling to be sure, but it’s worth. Case in point: Brendan performed 3 sets of 3 with the band, and then 2 without, and they were some of his best front squats to date!

Not to belabor the point, but if you missed Dan Samarov’s comment from this past Sunday’s post regarding his experience at the 2011 Mid-Atlantic Regionals, read the following thoughts from an extremely seasoned athlete and competitor:

“A few quick points on lessons learned:
1. I’ll preface this with saying that neither Salty nor Tom B. have paid or otherwise encouraged me to say this… it is purely observational. Here it is: Efficiency in movement and skill. Watching some of top guys do there thing what truly separated them was amazing efficiency in every movement, from first rep to last. At a point everyone breaks down a bit, but still. More on this to come.”

This from a guy who swam for a D1 college team and has made it to Regionals two years in a row. 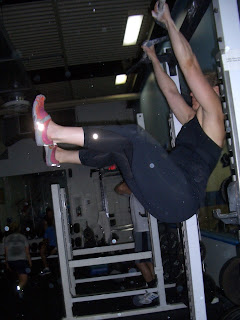 and in case anyone’s wondering: No, it’s no a coincidence that Sebastian wondered aloud about T2B before class, a movement which then magically showed up in the workout. That’s a massive hint to all you burpee-loathers – be careful about hoping for a burpee-free class within ear shot of the coach, as that’s a good way to ensure that the workout will include burpees.

Good work last night. Hope to see the majority of you tonight at Ireland’s Four Fields in Cleveland Park for the CFDC Social.