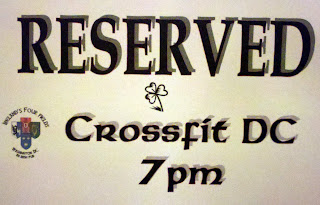 Cheers to everyone who made it out Friday night for the CFDC Social, and thanks again to Brendan for organizing (and congrats again on the new job!). If you didn’t/couldn’t make it, don’t worry, we’ll be better about organizing more.

A serious warm-up usually means a serious class, and seeing as how the warm-up was done on the basketball court, making each exercise a full length, you knew something good was in the mix. 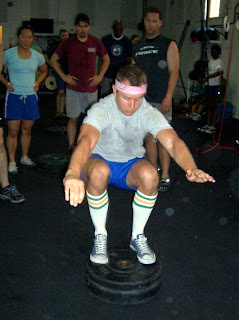 On the heels of last weeks seated box jumps comes another explosive iteration. Jumps were to be done from your knees with feet extended.

Make use of a slight stretch-shortening cycle by sitting back onto your feet before exploding up and forward with the hips, landing on your feet. Scale up by jumping on to, or over, plates or boxes.
Strength: 6 x 3 Deadlifts 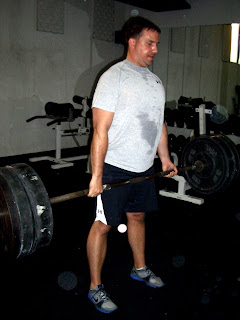 The 6 working sets could be done either increasing weight each set or remaining at moderately heavy weight. Obviously, the weight you choose should not be your 3 rep max. 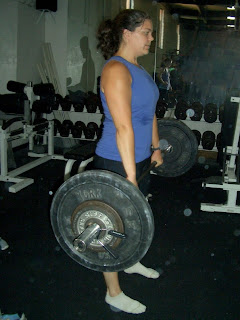 Great work with lots of attention to form, including some smart decision making regarding weight (highlighted below in a discussion about scaling). 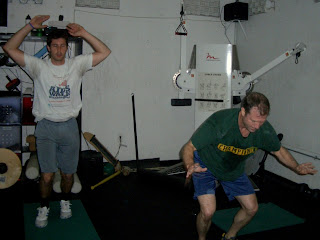 Cheers to Matt and Ethan for the Blourpees; there would’ve been an additional 20 for Brendan, but seeing as he bought everyone drinks at the CFDC Social, he understandably got a pass – we are not beyond bribery! 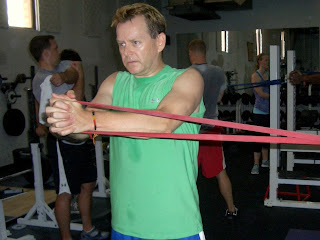 Great work everyone, keep it up! Now read on for a follow up op-ed regarding scaling, especially as it concerns form and intensity.

As a follow-up to last week’s post regarding good form and efficient movement, I thought I would give some quick commentary on scaling. I fear that some of us are attaching a negative connotation to the word “scaling,” as in “oh, I had to scale the _____ today… I’m too weak/I wimped out”. Nothing could be further from the truth! Scaling is about mastering, and thus optimizing, your own progress. That is never a bad thing. Adaptation doesn’t come from continually trying to get through workouts beyond ones scope. Progress is a product of relentlessly hammering the weak links, so you can move up the ladder of difficulty. Keep in mind that progress is often a 2 steps forward, 1 step back type of game. So long as we maintain that general forward trend, we make progress.

So what is appropriate scaling? That depends on a whole host of variables, but most of it is pretty obvious (strength, endurance, flexibility, mobility – all the things we’re working on in class, oddly enough…). Let’s use the most recent class as an example.

In a strength session like Sundays, the easiest scaling option would be to work at a sub-optimal weight – i.e., a weight that’s lighter than what you would normally work at. The focus of your work sets then becomes either making each rep as perfect as you possibly can, or making each rep extremely dynamically explosive. In extreme situations, scaling could also include using a different exercise that targets the same muscle groups, say for someone with low back or hip issues. However, scaling in a low volume strength set like Sunday’s does NOT include working heavy for fewer reps than prescribed – that would be numbers chasing. If you can’t lift it for 3, good reps, then you have too much weight on the bar. 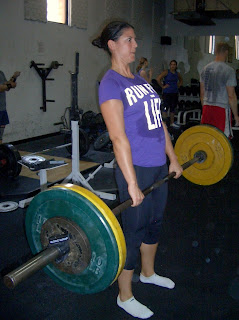 To further my example, I’m going to highlight Amelia and Erica, who worked together on Sunday. On Saturday, Amelia and Erica both did a full brick workout (24mile bike ride followed immediately by a 10k run). As such, they decided to scale back on Sunday with their DLs, working at a lighter weight but using the opportunity to perfect their form. This was a great opportunity realized through smart-decision making, and I can guarantee they both got more out of the workout than they would’ve had they pushed themselves to try and workout with their usual weights.

So now we come full circle to the comment that got brought this subject to the forefront, at least to us as coaches: when Dian opted to do regular burpees last week instead of double push-up burpees (which were scaled forms of the clapping-burpees), she was simply scaling the workout another step to help ensure the workout was manageably intense for her. This was absolutely the correct thing to do, and ensured her continued fitness progress. Had she not scaled, it’s likely she would not have finished the met-con, or it would’ve taken far too long, both of which are counter-productive. Neither Dian, nor any of the rest of you, need ever feel that scaling is negative. Remember, it’s not about what’s intense for anyone else, it’s about what is intense for you!

Feel free to sound off in the comments about this and/or the workout (including weight used for the DL).