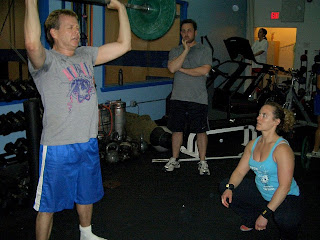 How many ways are there to scale a wall? Well, if you’re talking about a personal wall – and that’s a metaphor for “workout” for those of us who may have hit themselves in the head last night – then there are quite a few. The real question is, which should you choose in order to get the most out of the workout? This was a process which was hinted at in our last post on the merits of scaling. Tuesday’s class, however, brought that process to the forefront by starting with a quick review of how to scale a workout to best suit you, a process which begins by asking yourself a few questions: 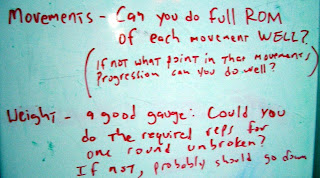 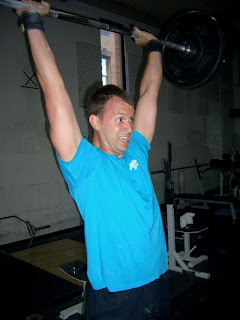 The goal was to use our four point list above to formulate a proper method of scaling Fran to meet your own individual needs/abilities:

MOVEMENTS – Everyone should be able to complete an adequate barbell thruster at this point; however, that’s not to say that the movement can’t be scaled – dumbbells are an option (more on this in the next paragraph), as is separating the thruster into two distinct movements: a front squat and a push-press. Pull-Ups, and especially 45 of them, are slightly more problematic for many. Scaling options for the pull-up include jumping and band assisted pull-ups. Of course, you should also take into account the “volume” of the workout when scaling the movements – i.e., if you can do strict pull-ups, but not 45 of them, then consider sticking with strict pull-ups while instead scaling the total volume of the workout (more on that below).


WEIGHT – As Pull-Ups are already body weight exercises (and I don’t suggest hacking limbs off to lighten the load), that just leaves the thrusters to worry about. Men’s RX’d weight is 95lbs, while women’s is 65lbs. We have bars available that are 15, 30 and 45lbs, so there are a wide variety of weight options available. However, if it’s the actual barbell that you find troublesome, particularly in the front squat, you can use dumbbells instead, a combination of scaling both weight and movement.

VOLUME – The total workload for Fran is 45 thrusters and 45 pull-ups. If after scaling the movements and/or the weights, you are still concerned about meeting the intensity requirements of the workout, you also have the option to scale the volume. In a “task priority” workout (a workout with a set number of repetitions done for time, e.g. Fran), you can reduce the volume by reducing the reps – this as opposed to a “time priority” workout (a workout with a set time goal done for a maximum number of repetitions or rounds), where you could reduce the volume by reducing the prescribed work time. One of the easiest options for Fran, and one which was smartly put to use Tuesday night, was opting for a 15-12-9 rep scheme, yielding a total of 36reps of each exercise (72 reps total, as opposed to 90).

INTENSITY – Intensity should be the sum of your scaling efforts. Your ultimate goal of the above 3 steps is to achieve a workout wherein you get the same effect, the same intensity, as intended by the base workout. For instance, in a sprint-like workout such as Fran, if you spend a lot of time recovering/resting amongst and between movements, than you have NOT achieved the same intensity that was intended for the original workout.

Tom A.’s comment to Sunday’s post was extremely insightful, but I wanted to quote a particular piece which he had borrowed from another CF blog-post, a piece which will conclude today’s scaling discussion perfectly:

“When a workout is planned well, the person programming it always has a goal in mind for the time or amount of reps that they expect a moderately fit person to achieve. The purpose of scaling is to make sure you fall within that goal. If you are taking twice as long as the rest of your training partners to finish, you are going too heavy. If you are finishing wayyyy faster than everyone else, you have scaled too light.

It takes a few months of CONSISTENT training to learn how to read your body and how to listen to what it is saying. Don’t get caught up by peer pressure and think you have to work through pain or gut out something you aren’t capable of doing. Learn to walk before you run.” 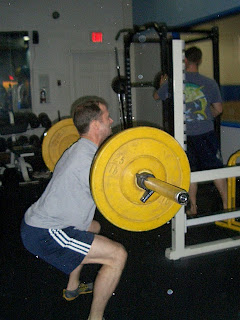 It was great to read so many positive comments to Sunday’s post about scaling – clearly it’s something that has weighed on the minds of many. Feel free to ask questions, or continue the discussion in today’s comments section; however, I would like everyone from Tuesday night’s class to post their respective time (as best they remember) and the scaling applied (including how they reached that decision).