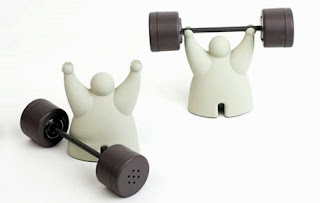 In fact, for many, variation is the quintessential ingredient. Most notable of course would be Louie Simmons and the entire Westside crew. Check out this quote from an article Louie wrote a fair, few years ago about overcoming plateaus in the deadlift:

“Most lifters deadlift too often and too heavy. This has an ill effect on the central nervous system. A better method is to use a variety of exercises that mimic the deadlift or special exercises that develop the individual muscles that are used while deadlifting (the conjugate method).”

Now, Westside applies that approach to all their lifts, but on Sunday CFDC was chiefly interested in how it affects deadlifting.

Three variations were chosen for the day: (1) Sumo Deadlifts; (2) Good Mornings; & (3) Rack Pulls (including High and Low Pulls). Class was divvied up amongst the three variations as follows: 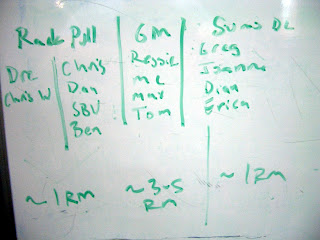 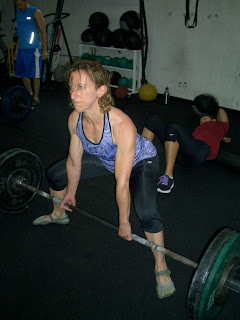 Begin with your feet in a wide stance with your toes pointed out at about a 30-45 degree angle – the specific width of your feet is personal preference, but it’s imperative that your knees remain in line with your feet throughout the lift (as opposed to having the knees collapsing inward). Your hands should take a narrow grip on the bar, inside your legs, no wider than shoulder width. Your shoulders should start directly over the bar, and the bar should be touching your shins from the outset. In this position, your hips will much lower than would be for a conventional deadlift, with your chest up. The hands should make contact with the thighs only after the bar clears the knees and the hips start to push through, near the top of the lift. 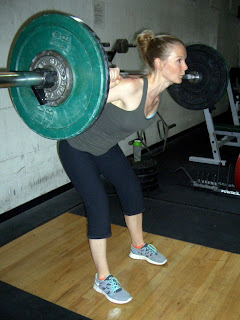 To set-up, place the bar on your upper back, slightly below the top of the shoulders/traps. Take a stance that closely mimics your deadlift stance (for most, this will be with feet directly under the hips) while keeping your knees soft (i.e. not locked). Now, simply unlock the hips and push the butt back as far as possible. The key is to get your hips to slide back (a horizontal-only movement) as much as possible while keeping a tight arch in the lower back. Lower your torso to a point just above parallel (the exact point will depend on personal flexibility) and then squeeze the glutes and drive the hips forward to return to standing.

GMs are about hamstring flexibility and hip mobility – i.e., the movement is governed by the amount of hip travel that your hamstrings will allow. Trunk flexion (bending at the waist) plays NO PART in a GM! As such, when you’ve pushed your hips back as far as your hamstrings will allow, STOP; any movement past this point will simply be bending at the waist, which is neither productive nor safe.

Although rack pulls can be performed in a variety of ways, class focused on two forms on Sunday: A high or ‘isolation’ rack pull; and a low or ‘sticking point’ rack pull. 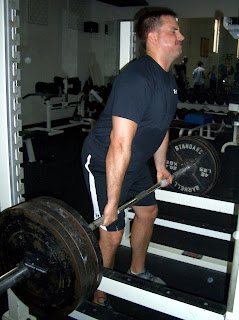 “High” in this case means the bar is set to a height just above the knees. Your shins should be perpendicular to the ground, and the bar should start directly over the heels of your feet, with your shoulders directly over the bar. To initiate, push your hips back until you can grab the bar, keeping a tight lower back arch, and then squeeze the glutes to force the hips forward while pushing with the hamstrings and pulling with the upper (and lower) back. The movement should be short and forceful, and will allow a lifter to move weight which is in significant excess of their actual DL.

The purpose of this lift is to mimic the phase of the deadlift where the bar has passed your knees, meaning the shins are perpendicular to the ground and the hips are moving forward more than upward. During this phase of the DL, the quads have essentially exited from the picture and the weight has moved backwards to a point over your heels, so that the work is being done by the hamstrings, glutes, erectors, and increasingly, the mid and upper back. (Paraphrased from the article “Rack Em Up — Rack Pull Variations” by Dr. Nikhil Rao) 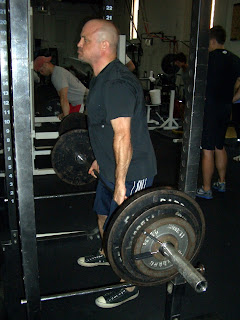 For the low bar rack pull, start with the bar set to a height just below the knees, the place where many of us start to stall out on our deadlifts. The key word there is “start” – working from the point where the weight begins to slow down, as opposed to where it actually stops. This varies from lifter to lifter, but usually ranges from a few inches off the floor to the height of one’s knees.

To perform the low rack pulls, set the pins to a height where the weight is suspended off the floor but is still below the knee (mid to upper shin). When gripping the bar, your shins should be close to vertical, but not quite, as though you’ve just initiated your deadlift from the floor and are pulling it up your legs. Unlike high rack pulls, doing pulls at this height will cause you to keep the weight light, as you will not have the benefit of the momentum garnered by the initial pull from the floor to help you through the sticking point. (Also slightly paraphrased from Dr. Rao’s article cited above) 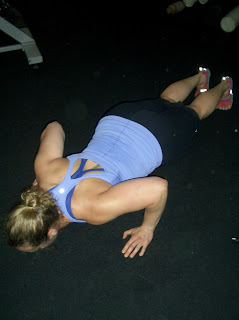 Done in teams of 3 with each teammate completing all reps of a movement before the group could rotate. Substitute for the DUs was 20 Mountain Climbers and 20 Single Skips.

Great work everyone! Expect to see this same set-up show up in a few weeks where everyone will be rotated to a different exercise. In the meantime, feel free to post what you thought of the DL-variation you worked with on Sunday, as well as the weight you worked at.