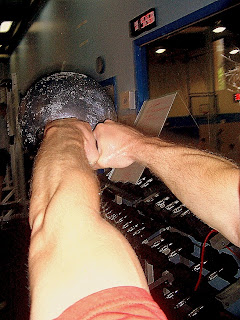 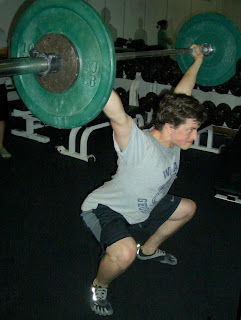 The Snatch Balance. A “skill transfer exercise” to help a lifter better understand and master the Snatch. Specifically, the snatch balance helps a lifter learn to exert continuous force on the bar while driving themselves under the weight. The focus on this movement has to be on getting down fast. Of course, that is a skill to be worked on, and not an easy one to master, but to help, there are three graduating versions of the snatch balance: the Pressing, the Heaving, and the Pure/Dynamic.

Pressing: Feet start wide and aren’t moved while the lifter applies constant pressure on the bar, slowly pushing themselves under – difficult to perform as it requires the equal pressure to be applied through-out the movement ~ key on trying to keep the bar in the same place at all times during the lift;

Heaving: Feet start narrow but finish wide as the lifter performs a slight dip&drive motion to impart just a bit of upward momentum on the bar while he/she jumps their feet out and drives their-self under the weight – difficult to perform correctly, but can provide an instant of weightlessness to help the lifter beat gravity when pressing themselves under the weight;

Pure/Dynamic: Feet start wide and aren’t moved while the lifter applies constant pressure on the bar while exploding downward under the weight, receiving it in a full squat position – by far the most difficult to perform.

Usually we practice all three versions of the snatch balance, or at least the first two versions. So why was class limited to only the first and last version this time (cutting out the heaving snatch balance)? 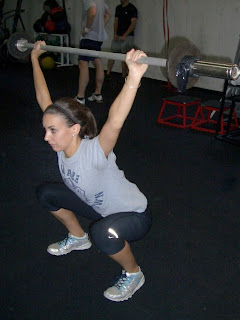 Although the heaving snatch balance can be the easiest of the three versions for most people to perform, it is also the most likely to be mis-performed. Too often, lifters impart too much “heave” and ride the bar down into a squat, turning the lift into a “heaving-behind-the-neck-push-jerk-into-an-overhead-squat.”

Instead, Sunday’s class focused on only the first and third versions in order to emphasize the need for continuous pressure on the bar. This need – to exert constant pressure on the bar – is encapsulated in the oft-given instruction “drive yourself under the bar!” This means (to crib lines from a previous CFDC post in November, 2010) that a lifter should be continuously exerting force upward on the bar as they descend under it, especially in the full squat position, where a lifter should be pushing up against the bar AT ALL TIMES to help control the weight. 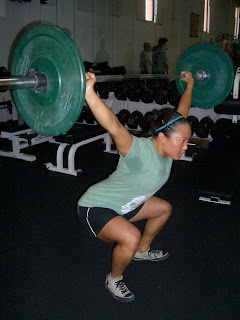 Hopefully those in attendance have a better understanding of this requirement. To facilitate understanding, and ensure no one let their ego’s get the better of them, everyone was required to perform at least three sets of 2 reps of pressing snatch balance. Only after getting coach approval could a lifter move on to the pure snatch balance; if approval was not forthcoming, then lifters continued with the pressing snatch balance for the rest of the skill/strength set. 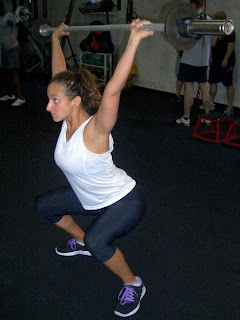 Great work all around on what is an extremely difficult exercise to master. Of course, the best way to get-over a lift requiring a lot of thinking is to rip through a few movements which don’t require a whole of thought…just lots of energy. 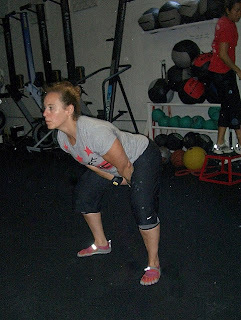 Perform a set of max pull-ups (strict or kipping), followed by a quick blast of 10 heavy KB Swings (done Russian Style – only to chest level), 15 burpees, and 20 squat jumps, with a 2min mandatory rest in between rounds.

Hope everyone enjoyed the rest of their weekend. See you all on Tuesday.