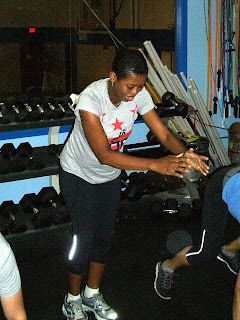 “If a burpee falls in the basement, and no one is around to hear it,
did it happen?”

Apparently, the answer is No. So that would mean a quick 40 burpees to start things off Tuesday night. Happy Birthday Dian (although, technically her b-day was on Monday). Miss the burpees? Well, don’t worry, there are a few more b-day’s this week… 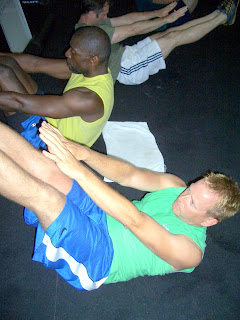 In keeping with our increasing coverage of pose running technique, Tuesday’s class started off with a few form drills. The point of these drills is to help increase knowledge and understanding of the technique. Remember, it’s technique that determines how well you run or how injury prone you are. Fancy shoes aren’t going to make your runs faster, nor will simply taking to the roads barefoot reduce injury if you don’t have a basic understanding of running mechanics. The only way to accomplish both of those is to be as efficient as possible, and the way to do that is have a firm grasp of the technique involved. 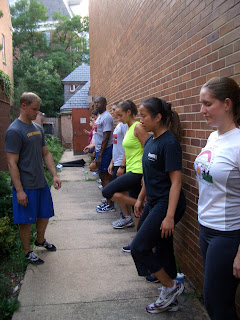 With this drill, we are simply working on learning to use the hamstrings to raise the leg, pulling the foot directly up under the body. Standing against the wall helps prevent kicking behind, forcing the foot to travel up instead of back. Another key point to work on during this drill is remain balanced – keep the shoulders down and back with glutes and abs squeezed in order to prevent sideways oscillation from one foot to the other.

Again, the focus is working on pulling the foot up, but with this drill we are combining it with a forward lean into the wall. By using the wall, we can create a constant forward lean against a stable and static surface, which will allows us to still concentrate on proper pulling technique. 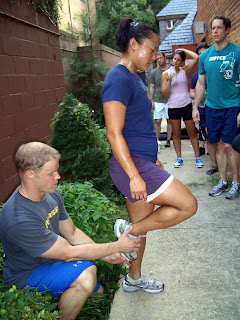 Another point to remember (among many) is to relax the pulling foot; allow the foot to hang, rather than keeping it in constant dorsi-flexion (toes pulled up). This position will really overwork your tibialis muscles, which runs along the front of the shin, thus giving you shin-splints. Also, allowing the foot to relax will help the foot land softly, rather than with a hard thud.
Drill 3# – Wall Running

Now that you’ve got the feel for pulling while leaning into the wall, the next step is to transition into a run. The closer to the wall your feet are, the smaller the pull (think a slow, marathon pace), while the farther your feet are from the wall, the greater the pull (more like a short distance run). As you will notice, the lean increases with the speed. REMEMBER, the lean is created from the ankles, not the hips. Leaning at the hips will only cause excessive strain on the lower back – if you’re getting a sore back when running, this is a primary cause.

We’ve covered quite a few drills at this point – check out our earlier drill work HERE and HERE. Much more to come however. 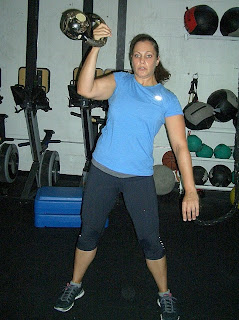 This is something we’ve wanted to work on for a while, and seeing as how we’d already started off Tuesday with some technical running work, we continued right on in to some more technical work with the KB Snatch. Before you go another step further, please check out the KB Snatch post from last August, 2010, which includes a bullet-pointed list on the technique involved as well as two multi-panel photos showing what and what-not to do.

The progression used Tuesday night to help work into the KB snatch was as follows:

Again, refer to our earlier KB snatch post for help understanding the technique. 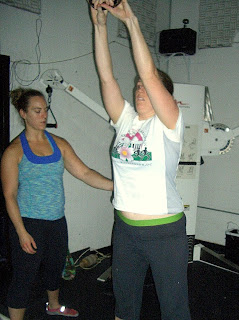 In reality, it was a “50 or less” option on the swings. The deciding factor should be form – once your form begins to break, set the KB down. This was also a good opportunity to work on the “double breathing technique” – using two, forceful exhalations to help maintain mid-line stability while also allowing the body to generate enough momentum through the hips to move the KB. 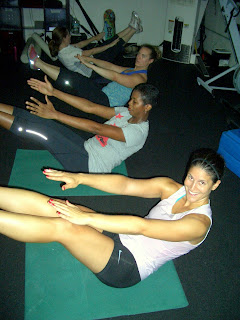 Each done for a minute. Look at all those smiles – this must be a fun place to be with fun things to do… 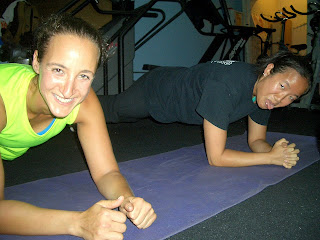 …although not everyone may agree with that.


Each of you should’ve received an e-mail about the changes to payment that will be taking place starting next week. If you didn’t receive the e-mail, or have any questions, leave a comment to this post and I’ll be sure to get you an answer. Great work Tuesday night. Be sure to keep up with those fluids, especially as things start to get hotter this weekend!
.
.