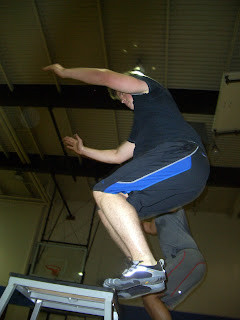 All told, there was a total of 24 minutes worth of rest programmed into last night’s workout, as compared to the just 16 minutes of work that was done. Bet it didn’t feel that way. 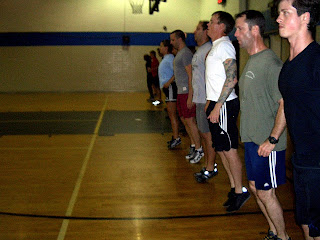 (1) Ball of Foot Hops (emphasis on tight mid-line and landing on the ball of the foot;

(2) Forward Hops (as above, but with a forward lean introduced);

(3) Stop and Start Hops (again re-emphasizing the use of gravity by leaning forward for momentum and pulling back to slow up – also a good self-check for body posture); and,

(4) Forward Hops into a Light Jog (this should help to transfer the idea of using the forward lean from the hop to an actual running movement. Remember that the mid-line should stay tight, and that the body lean is created at the ankles, NOT the hips)


While the first two exercises were meant to exact a heavy toll, they were also patterned in that order to help cement a few key points. 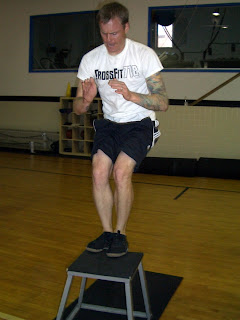 The goal for the box jumps was “continuous” jumps; really try to explode off the ground and back onto the box as quickly as you can. This concept built off the same instruction given during the Pose running drills: less time on the ground is better, so really work on pulling the feet off the ground as quickly as possible (quick feet, but quiet feet). 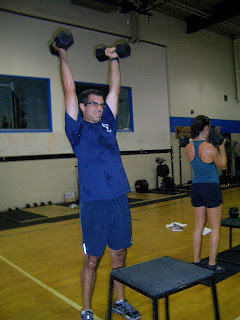 After hammering everyone’s posterior chain, those who tend to dip deep for the push-press would find that their muscles weren’t of much use at that point, making those repeated “quarter-thruster” push-press hellaciously hard. This should really drive home the need to shorten the dip to a slight unlocking of the knees followed by an explosive drive upwards. 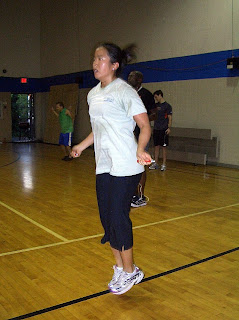 After that, it was simply push through to the end. Double unders were scaled to single skips (since the emphasis was on the cardio aspect rather than the skill work), and burpees were programmed with a games-style hand release at the bottom.

Fun, right? Score (if you can remember your numbers) is equal to lowest number of box jumps and double unders plus total push press and burpees. Awesome, awesome work; a lot of good enthusiasm, and I really liked hearing athletes cheer for others even when they were having enough trouble simply catching their own breath.

POSTSCRIPT: A big congratulations to Paul on his selection for Officer Candidate School yesterday! Good thing celebratory burpees were included in the workout.