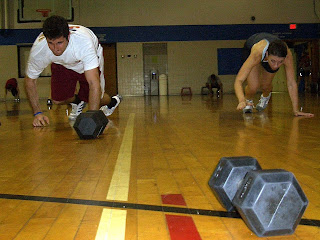 For all those who managed to wade/swim their way to the gym Thursday night, we had a new take on an old favorite lined up: the DB Complex. First, however, some warm-up and skill work.

Class was divided into 3 groups for 5-7 minutes of DU work as follows:

Group B = athletes who can do DUs, but not consistently (anywhere from 5 to 20 DUs at a time, with or without single skips in between), worked on a DU Ladder (DU Ladder = 2 DU, 4 DU, 6 DU, etc., where each break or incomplete set means you start over at the beginning);

Group C = athletes with no DUs or very few worked on wrist speed, starting with attempting to just one DU (no single skips before or after – just spin the rope as fast as possible), followed by some one-handed wrist work and then a return to single DUs. 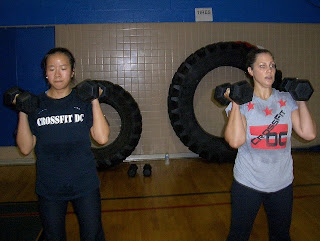 In short, the Bear Fight is a DB complex ladder combo’d with a Bear Crawl interval. Let me explain:

All athletes begin at one end of the court. For Round 1, each athlete does 1x Deadlift, 1x Power Clean, 1x Push Press, 1x Thruster, 1x Walking Lunge (Lunge Right, Lunge Left), then puts the DBs down where the lunges end and performs a bear crawl to end of court and back to their DBs for the second round. 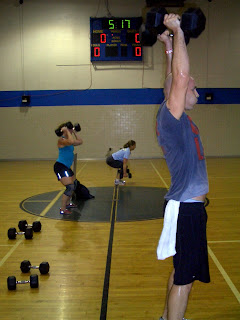 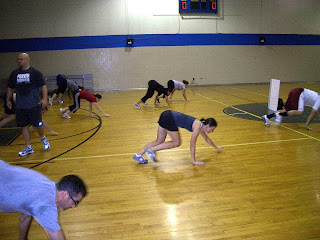 Round 3, as you might imagine at this point, equals 3x Deadlifts, 3x Power Cleans, etc., with 3x Walking Lunges (or 6 single lunges), followed by the bear crawl. Each athlete continues in this manner until they reach the far end of the court with the lunges (i.e., both feet cross the end line), at which point they turn around and farmer’s carry the weight back to the start line. 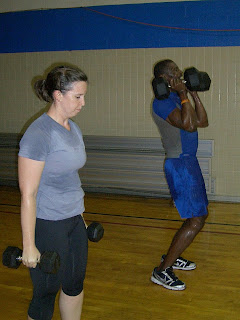 At those weights, the Bear Fight (so dubbed because the complex resembles The Bear barbell complex mixed with the bear crawl) became a study in contrasting difficulty;
as the bear crawls got shorter, the reps increased on the DB complex by five each time, and a 1/3 to 1/2 BW, that’s no small increase. 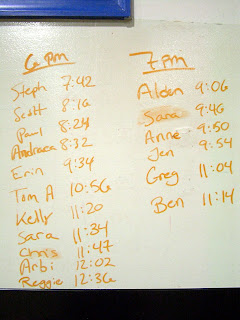 Once all was said and done, we finished things off with some much needed stretching and foam rolling. The slick floor (rain, humidity, sweat) made for some tricky conditions, but everyone did a great job of persevering. Please be sure to scroll down and read yesterday’s post regarding Fight Gone Bad 6!