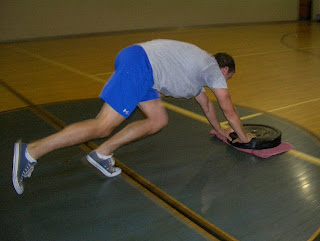 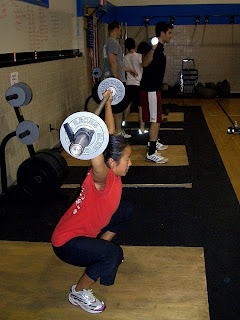 We covered the snatch balance back in July, breaking down the three variations and the benefits of each. We paid particular attention to the pressing snatch balance because, of the three, it really drives home the need to “continuously [exert] force upwards on the bar” as you descend under it. 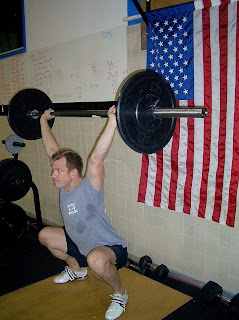 Thus, instead of pressing the bar upwards, you are pushing against the bar in order to drive yourself under the weight. Done properly, the bar should remain in the same place through-out movement, with only the body moving downwards in a controlled, even manner. The pressing snatch balance also has great carry over into bettering your overhead squat, which is convenient considering there were quite a few OHS programmed into Thursday night’s met-con.

The reps could be divvied up between partners in any manner, so long as each pair completed all of the assigned reps. Suggested weight for the OHS was “light,” meaning anything that would allow an individual partner to complete at least 30 OHS in two or three attempts for the first round, since, presumably, it would take more during the second round of OHS. Burpees were done “games style” with hands off the floor at the bottom. 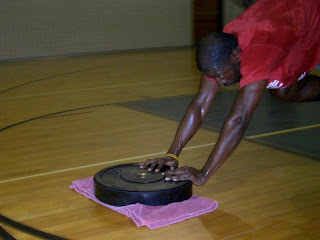 The plate push was accomplished by placing a bumper plate (45lb for guys, 25lb for girls) on a towel and then pushing it across the court. 1 Plate Push = down and back the length of the basketball court. These were the clearly the killer of the night, taking a toll on everyone. It didn’t help that the more people travelled the length of the floor, the sticker the wood became, creating massive friction that took a lot of effort to overcome. 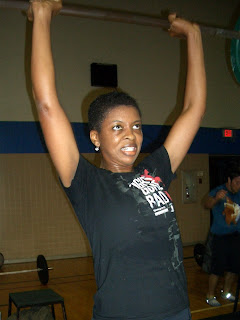 Definitely a grinder, and a lot of great effort put out by those who attended. For those of you competing in FGB this Saturday, be sure to rest up and come ready to throw down. Congrats to Dian (above), Ethan and Tex who already fit their FGB workouts in Thursday night and all set some impressive scores. I’ll send out an e-mail confirming the times requested. Be forewarned that if you plan to simply drop in, heats are pretty full.