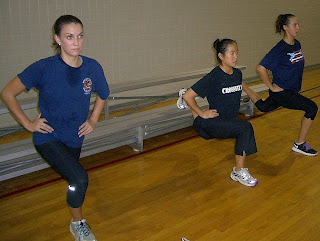 On most days at CFDC, with a few exceptions, you can pretty much bet that there will be at least two parts to class. The first is often a strength or skill-based workout; the second is often a met-con of some sort. Unsurprisingly, Tuesday’s class had two parts – except, this time, it was the conditioning that came first, followed by a three-part strength workout. 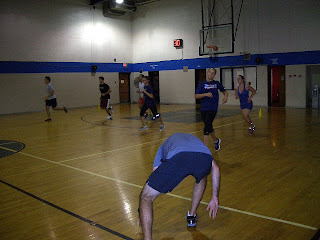 The Death by 10 Meters workout served a couple of purposes. On a practical level, it helped to further the somewhat short warm-up, as people’s exertion levels slowly ramped up as the workout went on. On a theoretical level, it helped to drive home a few points we’ve been working on in our Pose running reviews, especially body lean. Yes you need body lean as you run, but utilizing the lean as you stop and start will make a huge difference. 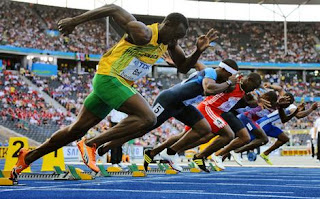 Check out the forward lean on the sprinters above (and, yes, that just happens to be the “World’s Fastest Man” Usain Bolt in the foreground). They’re using that excessive amount of forward lean to help them pick up as much speed as they can in the shortest amount of time possible. If Usain Bolt needs to do it, you can bet your @$$ we do, especially when we only have a scant 10M to pick up as much speed as possible (which is really only 8 meters if you factor in the fact that we need to slow up before turning around).

The key: Sink your whole body down low to touch the line, rather than simply bending over at the waist, and then explode off the line maintaining that excessive lean as long as possible. In other words, mimic that 100M start position from Usain Bolt’s picture above. The Death by 10M will give you lots of opportunity to perfect that, since by the 10th round, for example, you have 9 separate opportunities to try and get it right! 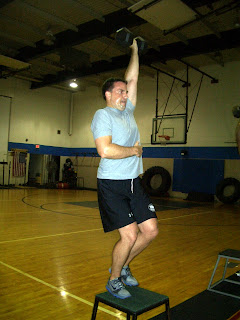 While referred to as “step-ups,” these have less to do about the legs and much more to do with core and shoulder stability. Keep the shoulders driven straight up with the elbow locked, suspending that weight directly above the mid-line of the body with the arm close in to the head. The core should remain engaged through-out in order to keep the body from leaning over as you step up. Remember, core also means low back, and includes the glutes as assistance muscles – these too must remain engaged to prevent yourself from leaning backwards and over-arching the back to support the weight. 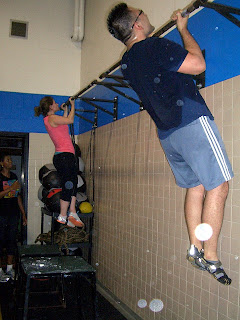 A quick reminder about using bands or boxes as assistance for pull-ups and chin-ups: be sure to give it a try without any assistance for at least one rep before switching over to your assistance. For one, this will help build up your body’s muscle patterning, teaching it what to contract, when to contract it, and how hard it needs to contract. Secondly, you might just surprise yourself, just as Stephanie did when she knocked off her first two strict chin-ups ever during her second set! 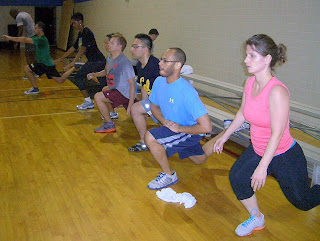 Bulgarian split squats are a great quad and glute developer. While one option for increasing the difficulty is to add weight, our choice for Tuesday night was to opt for a tempo. The BSSs were done as a group, with everyone lowering into the bottom, holding for roughly 2-3 seconds, and then rising. The hold at the bottom really forces the glutes and quads on both sides to contract. 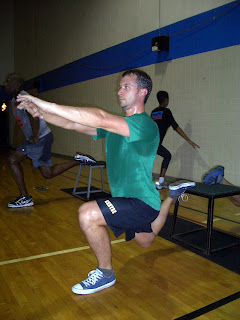 Really work on keeping the chest up so that the torso is vertical, sitting directly over the hips. Use your arms if you need to for balance, but don’t forget to engage your core (for those who had trouble with balance on this, were you squeezing your abs?). Really tough when done in 10 or more reps, so after both sides had been done, everyone hit the floor for 15 hollow rocks.

Great work during a surprisingly tough class. I was really impressed with people fighting their way to fit just one more round in during the Death by 10M. Props to Ben and Jen Choi for sticking with the not-really-better scaled version of over and back side steps; that looked brutal. Also, many apologies for being late on the FGB post, I seem to be getting behind. I’m a slacker, what can I say.