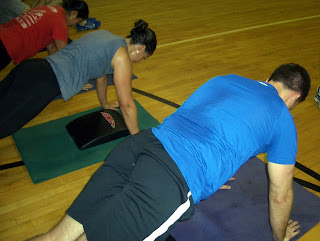 I’m going to do my utmost to make this post as unfunny as possible, as I imagine there are probably a few tender midsections among those who attended class Tuesday night. So, no humor, no jokes, no bad puns, and definitely no really bad puns. Of course, this will work for everyone except Julia, who, I imagine, started giggling two sentences ago… 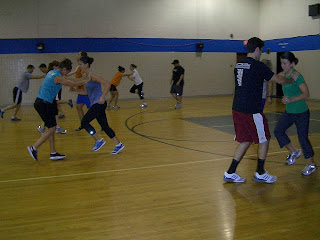 After a few weeks of run-based workouts, including both long distance for time and short distance sprints for reps, Tuesday night saw a return to reviewing our form through a few drills.

Class began with backs to the wall for a quick review of the proper foot pull. Placing the wall directly behind us acts as a barrier for our pulling foot, preventing us from kicking that foot backwards (as opposed to pulling it up under our bodies with our hamstrings). This is also an easy way to gauge whether we are actively stabilizing our mid-lines to prevent imbalance and shifting from side to side. After working these as both single- and triple-pulls, class turned to face the wall to work a quick 30 seconds worth of jog leaning into the wall. Having been intimate with the wall for long enough, everyone turned their attentions to their fellow classmates for a partner drill. 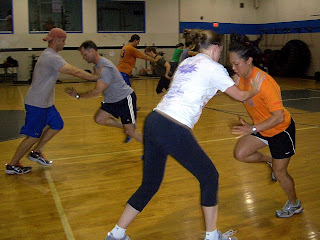 The last time we used the partner-supported running drill back in September, it was as a temporary support, with a partner giving support just long enough for the runner to get their lean and start their pulling before they stepped out of the way. Tuesday night, our drill started off similarly enough, but instead of stepping out of the way, the partner remained in front of the runner, offering moderate resistance the entire way down the court. This was to provide an object stable enough to lean into, but mobile enough so that we can continue working a supported lean through out the run.

Two key points that were brought up a few times Tuesday: (1) remember to keep the head neutral – you know where the ground is, and you know where your feet are, so no need to look at either; (2) use your arms, lightly swinging them in a straight line in sync with the legs – keeping them stiff and static leads to tight shoulders, and will often lead to erratic body motion. 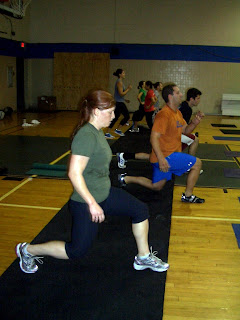 Lunges were done on the thick rubber mats so that everyone could ensure their knees were touching without doing any lasting damage to their knee caps. Plank holds were for a total of a minute – i.e., if you drop, you pause your time count and then renew it once you get re-start. 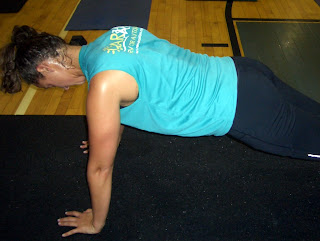 Consensus seemed to indicate that the plank holds were far and away the worst part of the workout. Remember to not only engage the abs, but also the back, especially the upper back, keeping the scapula squeezed together and down away from the ears. It will help too, if you remember to squeeze your glutes and tuck your hips forward, which will go along way in helping to prevent sagging in the middle.

Great work all around. Rest up and stay dry.