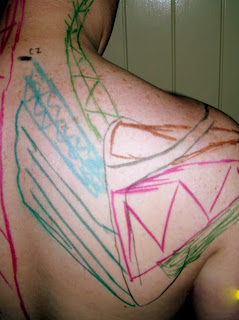 Lots and lots of scapular work on Tuesday, with a wee little met-con tossed into the middle of class.

We started off post warm-up working everyone through a few reps of the Supine Kipping Drill Blog. Back in July, we reviewed the supine kipping drill, accompanying it with a good three frame picture detailing set up and execution(you can review that blog post HERE). The one adjustment we made to the drill was to have everyone start from a good hollow position to better mimic the position from which you would initiate the kip you’re on the bar. 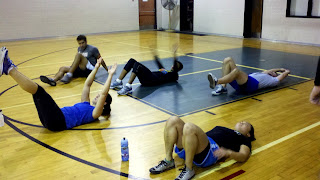 We followed this up with a few rounds of kipping practice hanging from the bars. Those athletes with less than 5 strict pull-ups started off with hanging scapular retractions. (Also covered in the same July blog post mentioned above, along with a great pic of Sara demoing the movement). The scapular retraction is an essential part of any pull-up, kipping or strict. 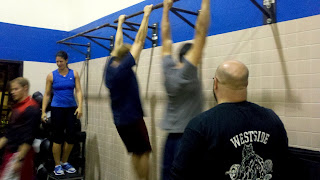 After that, we progressed into kipping on the bar. This involved simply the back and forth kip; no pull-ups were involved. Your progression to kipping pull-ups should logically follow a progression of (A) at least 5 strict pull-ups (to ensure you have the shoulder strength to stabilize during the kipping), (B) a proper kip (simply the back and forth motion), and then (C) kipping pull-ups. Often times athletes are tempted to skip part (B), or worse both (A) and (B), worrying less about the kip than about the kipping pull-up. Develop your kip, and the pull-ups will come; it’s all about efficiency. 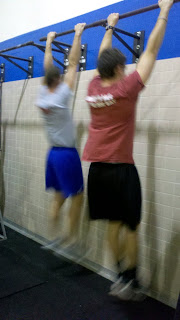 There was a lot of improvement last night. This is a movement we’ll be revisiting soon. Until then, continue to practice and throw any questions you have our way. 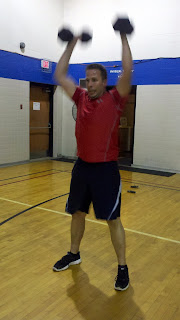 RX’d weight for men was 1/2 body weight in DBs; for women was 1/3 of body weight in DBs (i.e., as a 200lb male, I would grab 50lb DBs so that, together, the equal half my body weight). Sub for the DUs was 14 Mountain Climbers along with 42 DUs. Of course, if you were recovering from a torn pec, you really got off easy with med-ball cleans (for thrusters) and tire pushes (for the bear crawl) – mmmmmm, toasty quads. 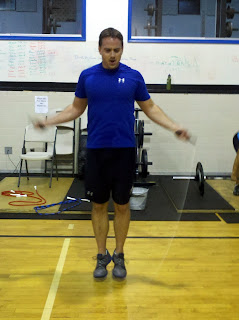 Top score was 12 full rounds put in by Steph, with Dan not far behind turning in 11 full rounds plus 7 thrusters. 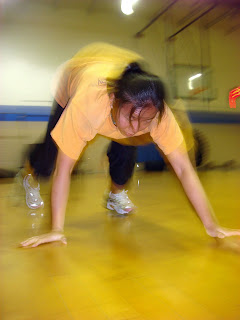 Again with the scapular retraction! Just as important as the hanging scapular retractions are for pull-ups, scap push-ups are the key to bettering your push-ups. Pulling the scapula back and down prevents the shoulders from rolling forward during push-ups, keeping the movement based in your chest muscles rather than the muscles. 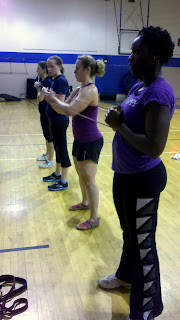 We combined with these with some partner-assisted paloff presses to help emphasize stability (you know, just a touch more core work to finish things off!)

Awesome work, especially on the kipping skill work. There is one thing that I would like to address though:

In particular, I wanted to follow up on a comment that was made last night (which, I fully realize, was probably made in jest, but which brings up a good point that tends to arise at least once a year):

Subs for exercises are NOT punishment, nor will they ever be. In fact, the closest we ever come to punishment in class are blourpees (and, really, that’s more encouragement than punishment). Substitute movements approximate the energy required to accomplish the originally prescribed movement (assuming the substitution is being made for non-medical reasons). 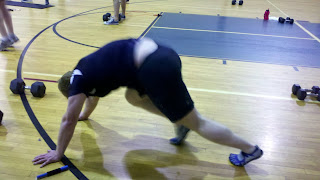 So, for example, the sub for DUs last night included mountain climbers along with single skips. This was to raise the cardio/energy requirements of the sub to the level of exertion required by the DUs. Our goal as coaches is to provide everyone in class with an option that will allow them to accomplish the workout WHILE AT THE SAME TIME still meeting the energy requirements.

So, could we let/make you do DUs even if you are horrible at them? Yes, but then you wouldn’t meet the energy demands of the workout, ending up with 2 or 3 rounds because you were doing the DUs one-at-a-time. Conversely, could we simply have you do more single skips? Yes, but single skips, even in greater volume, don’t approximate the energy demands of DUs – and, again, it would take so long as to limit your number of rounds and so would be no different than forcing you to do single DU’s.
Having personally struggled with Double Unders for ages, I can tell you that Tuesday’s substitution was a good one. More importantly, I can assure you it was not prescribed as punishment.
.
.