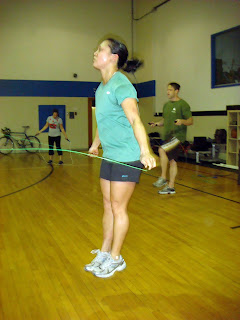 After an awesome outdoor workout on Sunday, it was back inside for Tuesday’s fun which included another healthy does of skill work. In fact, we’ve been focusing on a variety of skill work lately, and while potentially discouraging, this is not without a purpose.

It’s understandable that we aren’t often in the mood to voluntarily frustrate ourselves, to commit serious concentration to the details of our weaknesses. But that’s a mentality that will only serve to hold us back. So the next time your “favorite” skill pops-up, persevere, and devote as much attention and effort to learning new skills as you would to achieving a new 1RM on a lift. It will pay off.

We took a new tactic on jump roping Tuesday night, with the three different variations that would, theoretically, work us up to understanding the requirements for better double unders:

Those proficient at DUs worked the movement for the entire three minutes. Those that are still working on achieving double unders took a different approach: to perform 3-5 single skips followed by one DU. The transition, from single to double, is marked by speeding up the wrist (similar to speeding up during the sprints performed in the preceding interval – who’da thunk it!?). 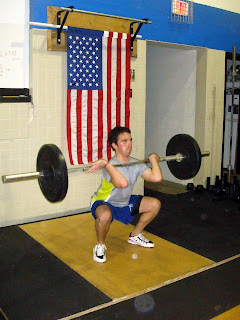 The Tall Clean can really help to teach you how to get down fast, aggressively pulling yourself under the bar during a full-on squat clean. The tall clean takes the hips out of the mix, generating movement using only the shrug. This is then coupled with a forceful pull down and under the bar (as opposed to simply dropping). It can be a frustrating movement, but serves its purpose well. If you have partners handy, a good cue can be to limit the upward movement of the bar with the use of PVC pipe – this can help you to gauge whether you’re pulling under the bar as opposed to pulling the bar up and then front squatting with it. 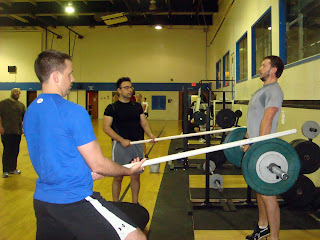 Once you have gotten the Tall Clean down moderately well (mastery will take a long time), a full on squat clean will seem relatively easy. Why is this important? You will be able to move a lot more weight with a squat clean than you ever will with a power clean. 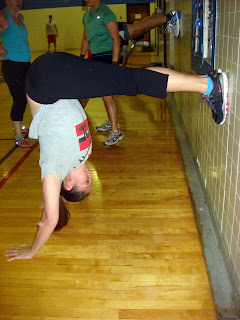 P1 performs a 90degree handstand hold while P2 performs a suicide run (mid-court and back, full court and back). The only rule was you couldn’t start running until your partner was in the hold position. The 90 degree hold was scaled to planks (arms extended) either on the floor, or for a slight scale up, feet elevated.

Nice work. A lot of potential for frustration on Tuesday, but glad to see people really trying to apply themselves to new stuff. See everyone on Thursday.