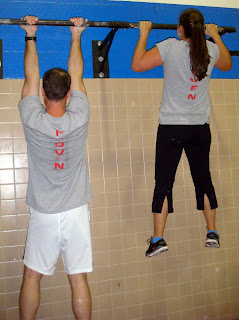 Where as Tuesday’s class was heavy on the technique and skill, Thursday’s class was relatively simple: as many reps, as many rounds, and as many minutes. How hard could that be?
Strength:
3 x Strict Pull Ups 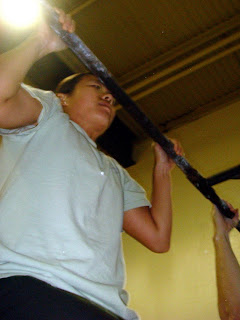 Everyone had 3 shots to get as many strict pull-ups as possible, limiting their rest to roughly 3 minutes between sets. Scaling for those with fewer than 4 pull-ups was 2 sets of 4 strict pull-ups, completing the set of 4 with as many negatives as were needed, and 1 set of box assisted pull-ups (the 6pm went with a recently recommended floor assisted rack pull-up which, I’m sad to say, didn’t seem to work out so well).
Met-Con:
2 x 5min AMRAP of
8 Wall Balls,
10 KB SDHP, &
12 Burpees
A double dose of Met-Con fun. Perform the 8-10-12 triplet as many times as possible in 5 minutes. Rest for 3 minutes, then perform the triplet again for another 5 minutes starting where you left in the first round (so, if you stopped at 8 burpees in the first 5min round, you would begin on burpee #9 in the second 5min round). Score was total rounds and reps. 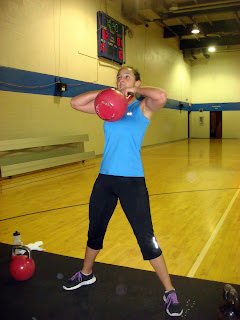 A quick note on the standards for wall balls: while the focus is usually on getting the ball high enough (i.e. to the 10ft line), the depth of the squat is just as important. Although the following language is from the Open Qualifiers Workout #5 this past year, it’s pretty much the universal standard for judging (or even teaching) the movement:

So if all 8 of your wall balls are at or above the 10ft line in Thursday’s workout, but they were all done from a 1/4 squat position, then not a single one of them would count (If you’re not sure that your getting down deep enough, you can always grab another med ball and stick it underneath you for a depth gauge).
Finisher:
1 x Plank Hold for Time
One shot to give it all you’ve got on the plank hold. Andraea led the way, clocking in a full 4 minutes of legit plank-hold, and by legit, I mean that she never even changed position – no butt in the air, no sagging, just flat-out plank hold. Awesome. 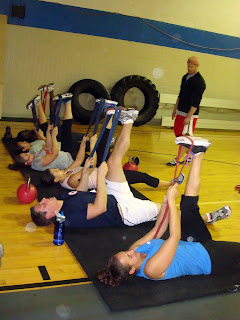 Extra time was used to take class through some much needed stretching and mobility. Half the time was devoted to some couch stretches (AKA the death stretch) and elbow-to-ankle hip stretches while the other half focused on loosening up the hamstrings with some flexion-extension work against resistance bands.
See you all on Sunday. And don’t forget, Daylight Savings Time ends at 2AM on Sunday morning, so be sure to re-set your clocks back an hour Saturday night before you go to bed!
.
.