To All our Veterans, we share our deepest gratitude with you on all days, but most especially today. Thank you.
-CFDC
————————————————
Skill Work;
or, Learn To Love Your Goats

Breaking from the norm, the sole focus of Thursday’s class was on skill work, and skill work alone. Why? Well, there’s a lengthy explanation to why, and how, we practiced the 4 skill movements chosen for Thursday’s session. First, the why.

In his 2008 bestseller, Outliers, Malcolm Gladwell describes the logic behind why people become successful, decrying the myth that natural talent or high IQ are predictors for achievement. Instead, Gladwell hypothesized that it was practice and devotion to improvement that governed success. To this end, Gladwell sought out information about high achievers across a wide range of fields, professions, and skill sets to see if there were common ties between their paths to greatness. 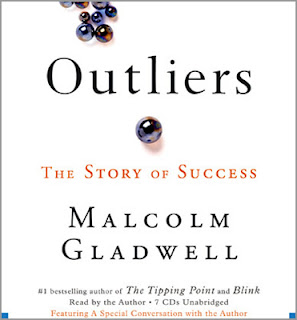 One of the more iconic studies set out in Gladwell’s book is a 1990’s psychology study of violinists in Berlin, Germany. The experimenters asked each violinist how many hours they’d practiced over the course of their career. Since all were relatively accomplished musicians, they had all begun to play around the age of 5, practicing the same amount each day. By age 8, there was some divergence where some practiced more than others. And by age 20, there was significant divergence. Based on these results, the examiners concluded that elite performers had around 10,000 hours of total practice, while the less able performers of the group had around 4,000 hours. Furthermore, they found there was very little indication of ‘natural talent;’ i.e., there were no performers who achieved elite status despite low hours of practice. Instead, each elite violinists had developed their mastery through around roughly 10,000 hours of practice, and no less. 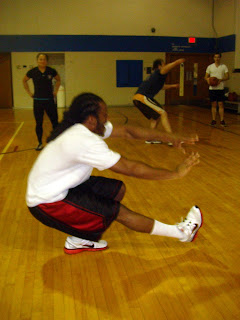 What does this have to do with us as CrossFitters? Many, if not all, of the movements utilized in CrossFit are skill based, requiring concentration and practice. Admittedly, however, some are much more rooted in ‘skill’ then others. The term ‘skill’ in this sense refers to motor skills, the learned sequence of movements which, when properly combined, produce a smooth, efficient action required to master a particular task. The development of motor skill, and specifically fine motor skills, occurs in the motor cortex, the region of the cerebral cortex that controls voluntary muscle groups. They key, then, is learning the movements, then learning the sequence, then working on combining the two to produce a “smooth, efficient action.” In other words, it’s all about progression and practice. With this in mind, we approached the 4 following exercises Thursday so that everyone, regardless of ability, would have the opportunity to learn and understand the correct progression, and then practice that progression outside of a workout. 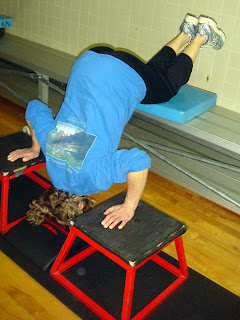 Everyone began with a set of 5 scaled HSPU’s, with knees on a box/bleachers and both hands on small boxes to ensure full range of motion. To slightly scale up, raise your knees by placing a bumper plate on the box/bleacher. The key is “verticality;” i.e., ensuring that your torso is not only as vertical as possible at the bottom (with head touching the floor), but remains as vertical as possible as your press back up – don’t allow the spine to arch and the chest to flatten out, which turns the movement into a decline push-up. 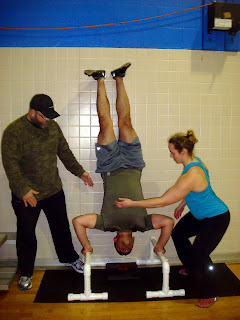 The next step in the progression was negatives with hands on parallettes. However, in order to attempt this option, people first had to “audition” by showing that they could perform one FRoM HSPU with hands on the floor; Full Range of Motion (FRom) means from lock out, down to head touching the floor, back up to lock out. Anyone who could demonstrate adequate control during the negatives was allowed to try FRoM HSPU’s on the parallettes. 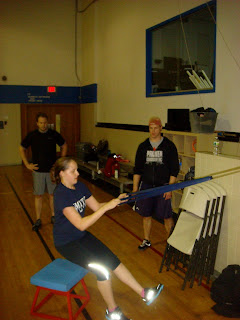 Everyone began with a set of band assisted pistols (these were scaled down to band assisted onto a box, which acts as a depth limiter and adds a little more assistance in balancing before trying to stand back up). From there, anyone comfortable with the movement was allowed to try FRoM Pistols without assistance from the bands (although, these could be scaled down slightly by using a light dumbbell as a counter balance).

For the kipping work, the entire class followed the same progression:

– 2×3 hanging hollow and arch holds – this was a slow and controlled drill who’s goal was to get the body into the two extreme positions of the kip: 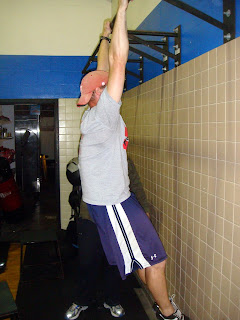 the hollow position (above), with the arms pressing away on the bar, hips tucked forward and back pressed into a controlled rounded position; and, 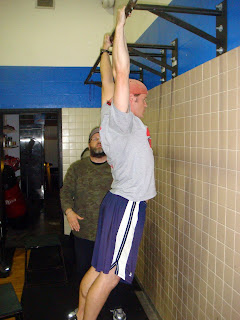 and the arch position, or hyper-extension (above), with arms pulling on the bar, hips tucked back, and the back arched.

– For those with more than 10-20 consecutive DUs at any one time: Flight Simulator (10DUs, 15 DUs, 20DUs, etc; for any set missed, simply retry for that number before moving on);

– For those with roughly 5-10 consecutive DUs at any one time: Junior Flight Simulator (2DUs, 4 DUs, 6 DUs, etc.; again, for any set missed, simple retry for that number before moving on); 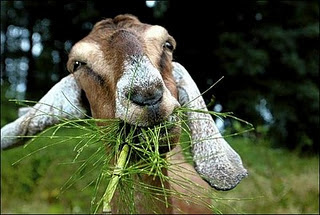 Simply put, your goat is an exercise or movement you suck at, hate, or both. There are certain movements, skills, strengths or whatever that we simply are not good at. This can be due to genetics, training modalities, choices made, life situations while growing up, etc. Whatever the cause we all have things that we struggle with. The 4 skills we focused on during Thursday’s class are usually top among most people’s goat list, which is, thus, why we spent an entire class working on them.

Naturally we have a tendency of avoiding our goats. Sadly, this is not a great approach. If we avoid practicing what we dislike, our goats simply get bigger and bigger, and will continue hold us back in our pursuit of fitness. Instead, we must learn to “embrace the suck” and choose to spend a little extra time on the things we each struggle.

And, in case any of you are wondering why we refer to them as “goats,” I have no idea – my best guess would be that it comes from the idiom about something that “get’s my goat,” meaning something really annoys you. As in: “double unders really get my goat.” Yea, that statement would be pretty accurate.

But, it says “hate,” so can burpees be a goat? Well, sure, if you really despise them, because they’re not exactly mentally challenging. Or, are they?

Enter the CFDC Drunken Alphabet Burpee Chain!
In a single file line, each person performs a burpee calling out a letter of the alphabet starting from Z and working backwards down the line (so, P1 does a burpee and calls out “Z,” P2 does a burpee and calls out “Y,” etc. etc.) Any mistakes, and the chain restarts at Z with the person who made the mistake. Just a fun little mental team-building exercise to close out the class.

A long post with lots to read, but worth it if we are all to continue growing and improving in our fitness pursuits. Hopefully the positions and progressions will be foremost in your thoughts the next time any of these movements show up in a workout. Until then, spend a little time before/after each class, and practice one of the above. In the meantime, I’d like to recognize Malcolm Gladwell, CrossFit Marin (& in particular their “10,000 Hours” post), and good ole Wikipedia for their contributions (both in ideas and language) to today’s post.

Best of luck to all those competing this weekend at the 2011 Mid-Atlantic Hopper Challenge at CrossFit BWI this weekend! This includes Steve O., Tom A., and the CFDC Team of Julia, Cali, Sebastian, Ethan, and Chris. If you’re interested in dropping in to watch and cheer, click on the link or picture below to get directions and times. 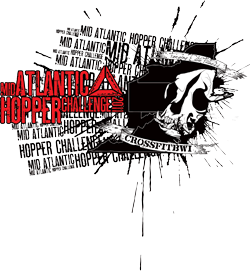 Additionally, despite the fact that Tom will be at the Hopper, there will be class on Sunday; Coach Mike Choi has kindly agreed to lead class this Sunday. Mike is our resident Olympic lifting coach, and I would highly encourage all of you to use this opportunity to learn from him.