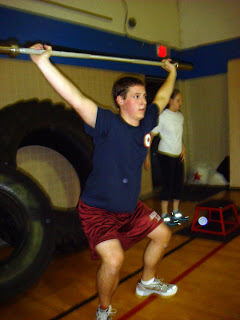 Well, now that Blogger is letting me back in, and since I have actually been afforded a few minutes of free time, this would be a great time to update the blog, wouldn’t you agree? First up, a review of Sunday and Tuesday’s classes, which went hand-in-hand. This will shortly be followed by a review of this past weekends adventures in Glen Burnie, MD at the BWI Mid-Atlantic Hopper Challenge.

Both Sunday and Tuesday’s classes concentrated on the reviewing the Snatch, with Sunday’s class spending quality time with resident Oly Coach Mike Choi, while Tuesday’s class was stuck with Tom and Chris. A lot of information was handed out in both classes, so to distill things down, we’re going to first review the modified Burgener Warm-Up which Tuesday’s class worked through extensively, followed by a review of the Snatch (as adapted from a previous Points of Review post by Coach Choi).

The Burgener Warm-Up is named after well known Olympic Lifting coach Mike Burgener, who, in his own words, found that

when learning the olympic lifts for the first time … the following warm up is very helpful learning bar path requirements in snatching. there are several steps in this warm up protocol. before we go into this warm up, all students are taught foot position: jump (feet under your hips) land (feet 2″ outside hips with bent knees weight on heals.) practicing jumping and going to landing is essential in the understanding of: CREATING MOMENTUM AND ELEVATION ON THE BARBELL THRU A RANGE OF MOTION!! understanding that the barbell in the snatch position is approximately 8-12″ above the head (a wide grip) and is held by using the hook grip (thumb around the bar, fingers around the thumb) 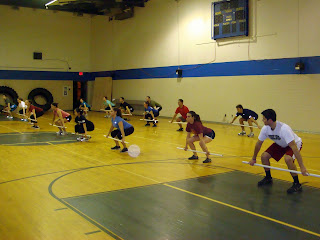 For our modified version, we worked through the following progression, working each step for at least 5 repetitions (except the 3rd, which, owing to it’s importance, we went through 10 repetitions of):

1st – The First Pull: Starting position (with PVC mid-shin) to the knees, keying on the shoulders and hips rising at the same rate;

2nd – The Second Pull {OR, Triple Extension}: Low Hang position (with PVC just above the knees) through full extension, with the knees and hips fully open and the shoulders shrugging violently towards the ceiling (arms are still locked however);

3rd – Transition To Third Pull: This should look exactly like the second step, however, at the end, the arms will continue to pull up on the bar, with the elbows driving high and outside;

4th – Mechanical Third Pull: Slowly pull the PVC into the top of the transition (PVC should be near the bottom of the sternum), elbows high and outside, and then quickly snap the bar into the overhead position;

5th – Landing Position: with the PVC overhead, jump the feet from the extension position to the landing position (i.e., your OHS squat position);

6th – Hang Power Snatch: from the low hang position, combine the 3rd, 4th, and 5th steps into one smooth movement; and, finally,

That’s a lot, especially the first time you work through it. However, it was well worth it, as there was some significant improvement in a lot of people’s snatching following the warm-up.

Points of Review for the Snatch 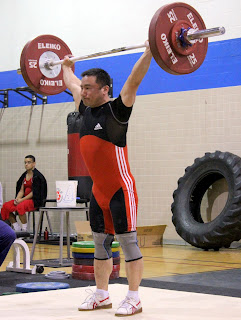 I’ve borrowed heavily from Coach Choi’s Points of Review for the Clean, because, except for the hand positioning and receiving position, his break down of the movement holds true for both lifts.

1) Start with shoulders slightly in front of the bar, body weight over your ankles, butt low(er than a deadlift), and chest up. Your gaze will be neutral to slightly downward. Hands are wide with, preferably, a hook grip employed.

2) Pull off the floor and imagine pushing your feet down through it. This keeps your shoulders in front of the bar for a longer period of time but keeps the hips from rising faster than the shoulders. Quads and hamstrings will engage at approximately equal force.

3) As the bar passes your knees, explode upwards with STRAIGHT arms, and imagine driving your shoulders through the ceiling. Be sure to get full extension. The rise of the bar and a straight bar path comes from the smooth transfer of force from the legs through the shoulders. 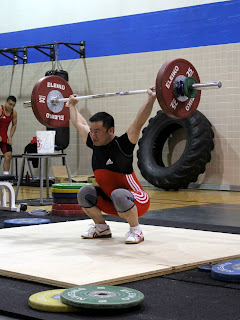 4) Pull yourself under the bar at a faster rate than the bar is falling. Snap the bar into position with shoulders driven up towards the ears (active shoulders) to support the weight. Be sure to engage the glutes and abs so prevent over-arching and keep the chest up. This will help put, and keep, the bar over your body’s center of gravity.

5) Pulling early with the arms. The most common fault with a lot of lifters, where-in they will begin pulling the weight upwards with their arms before they’ve hit full extension. This negates the power generated by the hips, and will severely limit the amount of weight that can be lifted.

6) Donkey kicking or stomping your feet. This kills the upward-driving power in your first and second pulls. The sound your feet make should come from the speed from which they transition to the squat position, not the force from which you pick them up and slam them down.

7) Watch for the hip hitch. This bumps the weight out causing you to over-compensate to get under the bar. Instead, focus on an upward shoulder drive with full extension.

8) Lastly, take YouTube videos of top level athletes for what they are: amazing and entertaining feats by strong athletes. It’s not always a good idea copy or mimic your favorite lifter’s specialized lifting techniques. Like a Major Leaguer’s baseball swing, no two are alike. Similarly, an elite level weightlifter’s mechanics may have been honed over years and tailor-made for his or her body. Examples include extreme laybacks and bumping the weight with your hips. There are a host of reasons why it works for an elite athlete but not for the novice. It’s best to stick to the fundamentals with an emphasis on a straight bar path and making the lift as simple as possible. 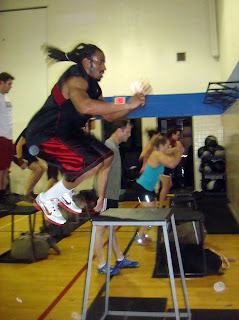 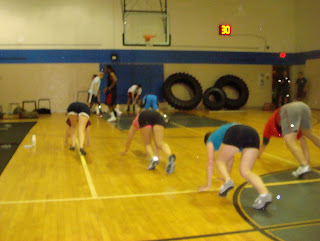 The bear crawls definitely took a toll on the stability of the OHS and the quad-strength for the box jumps.

Nice work everyone. Apologies again for the super-late posting, but I will get back on track. Also, if you haven’t yet responded to the Holiday Get-Together e-mail, please do so as we would really like to make it work for as many people as possible.