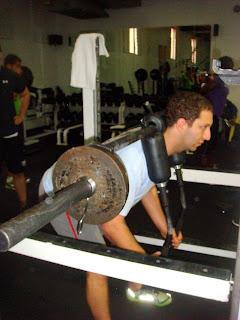 This was no episode of “The Dr’s,” but I trust it was enough to leave everyone with a good reminder of where our hamstrings are located (if you didn’t quite get the reference at the beginning of the sentence, don’t worry, there’s a nice little rant at the end of this post that will clue you in).

Increasing weight across sets, work through 6 sets of between 3 to 5 good mornings per set – all reps must be performed with good form (no rounded backs, no hinging at the waist, no squattish-GMs). 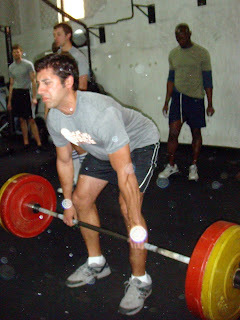 and since Good Mornings are to Deadlifts what Apples are to Apple Pie, it’s only appropriate that we followed up with a little bit of deadlifting. 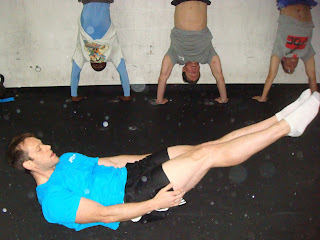 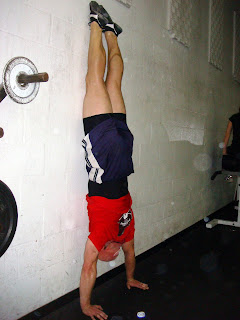 This triplet really emphasized the importance of postural control and it’s relationship among seemingly unrelated exercises. Sure it’s easy to concentrate on your form during the deadlift – we tend to harp on it enough. But the need to control the midsection isn’t a one-time deal, nor is it a one-way deal (and by one-way, I mean it’s not only about creating and keeping that beloved lumbar-arch position). If you don’t have enough control over your mid-section to keep your back from arching in the hollow position, or over-arching in the handstand, you probably won’t have enough control to keep it from rounding during a DL.

If, by chance, you don’t follow the daytime talk-show “The Drs” (and I can’t imagine why any of you would), then you may have missed that most frightful of fitness flunkies, Jilian Michaels, giving CrossFit a try on national television last week. Please, feel free to catch up by watching the clip below:

Now, admittedly, I am not a fan of Ms. Michaels, and I loathe the show the Biggest Loser due, in large part, to her horrifying approach to training (coupled with her sicky-sweet screeching). However, all personal sentiments aside, that performance was abysmal. Her mechanics were what I would expect from someone beginning Foundations rather than a nationally recognized “fitness trainer” with, supposedly, at least 17 years of experience. Watch the clip again: see her knees caving in on every box jump? How about a complete inability to lock out the push press? Or to simply catch a dyna-max thrown at the ground? And on top of that, she was utterly gassed by a 2min workout.

Maybe you think I’m writing this to make fun of Jilian Michaels, and, well, you’d be right to some degree. However, there is a larger issue beyond pointing out that all of you are more technically proficient and fit than Jillian (and, after watching that video a few times, I do mean ALL OF YOU). It’s this: our collective-job as CrossFitters just became that much harder, because there are now thousands of people out there who are thinking to themselves “well, if an all-around awesome arrangement of awesomeness like Jillian Michaels struggles that much with CrossFit, I’ll never be able to do it!”

Although CrossFit isn’t for everyone, everyone CAN do CrossFit. Sure, there are people out there who like their routines and cling to them like a baby koala. There are people who don’t want to touch a weight, let alone clean and jerk a loaded barbell; they’re perfectly happy to run, /elliptical/yoga themselves into oblivion. That’s fine. Hey, at least they’re doing something. But that doesn’t mean they can’t. Nor does it mean anyone else can’t. Age, weight, sex, previous athletic experience (or lack there of) – none of these prevent anyone from doing CrossFit. 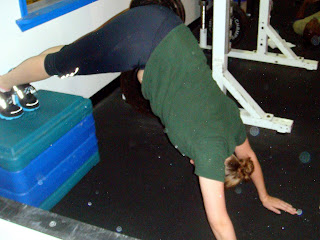 With the inexhaustible ways to scale a workout or substitute exercises, any movement, any workout, can be made to suit a persons abilities. We take pride at CFDC in practicing the “infinite scaleability” so many are quick to preach. There is little else that makes us as happy as being able to make things work for everyone who attends a class. True, not every coach out there will do this, and some are better than others, but now, because of Jilian Michaels gross display of coordination, it’s likely that few will even bother looking for a good coach. As such, we must now task all of you with the responsibility of assuring everyone with whom you discuss CrossFit that they CAN do CrossFit, and that there are coaches who can ensure that. Cheers.
.
.