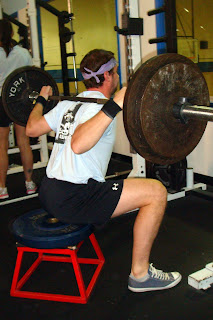 Since people still seemed to be dragging themselves out of their turkey-induced torpors, we thought it was a great idea for everyone to just have a seat during Sunday’s class.

The first part of Sunday’s box squat program called for everyone to work up to a 2-3 rep max. The range (2-3 reps) was given as failure should not be an option on box squats. Can it, and does it, happen? Yes, but it should be avoided if possible: the act of sitting on the box makes it awkward to spot (side spotters are a must), but also makes it extremely dangerous to bail if you aren’t in a proper cage. Thus, if you struggled to complete the second rep in any set, and thought the third rep might not happen, don’t push it. Simply call that set at 2 reps, and then proceed to the second part.

The second part of the box squat program was to back down to 90% of your 2-3 rep max for the day, and complete and additional 2 sets of 3 reps each. While lighter, pushing the volume in this manner will really pay dividends in building your strength base. 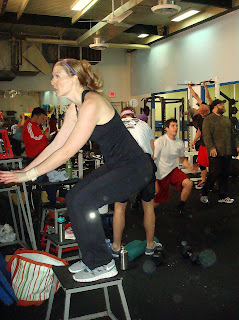 The met-con was done in teams of 4, with each member starting at a different station. Complete as many reps as possible within 2min, and then rotate during the prescribed 1min rest. Score was total reps for all 4 exercises combined. Nice work all around. If you fell off the healthy eating band-wagon as badly as I did this past weekend, then really challenge yourself to getting back on track this week. Hey, it’s Thanksgiving, it’s allowed, but all the same, we should do our best not to roll T-Giving and Christmas into one big cheat month. Exemptions can be made for the odd holiday party, but in between, really work hard to be as strict as possible. 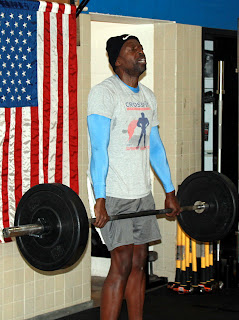 Also, congratulations to Reggie on his 5th year anniversary with CrossFit DC
(and CrossFit in general)! Here’s to 5 more.
.
.