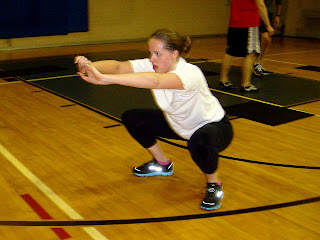 Over the past few months, we’ve regularly programmed at least one “skill day” a week, either for working on a particular skill or understanding how to best scale a skill movement for a workout. This Tuesday, we switched gears, but only slightly. Instead of focusing on a skill movement, we focused instead on a key body movement: use of the hips and the integral role they play through-out the broad spectrum of exercises CrossFit utilizes. 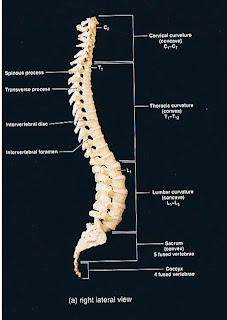 Standing, or lying, in a nice, neutral position (the position most of us should find ourselves in naturally), our spine produces a subtle S-shape. This is our natural position, and the one we should normally default to. Under load, however, it’s sometimes necessary to actively promote the lumbar curve by tilting the hips back (“Anterior Pelvic Tilt”) or, conversely, negate the lumbar curve by tilting the hips forward (“Posterior Pelvic Tilt”).

Anterior Pelvic Tilt
In an anterior pelvic tilt, the top of the pelvis is tilted forward and the bottom backwards (i.e., if your hips were a bucket of water, you’d be spilling water forwards onto your toes).

In lifts such as the squat and deadlift, we cue initiating or leading with the hips: i.e., slightly tilting the pelvis backwards and pushing the hips back (notice I said “slightly” – beware that if you have a hyper-mobile lower back, you can actually over-arch, creating a problem as significant as rounding). In these lifts, the anterior tilt, or flexion, will help maintain the lumbar arch, stopping the lower back from rounding and thus helping to avoid compressing the vertebral disks too much.

The cue to “lead with the hips” focuses our attention on creating that anterior pelvic tilt. Pushing the hips back first will help to center the weight over our mid-line while simultaneously helping to maintain our natural lumbar arch through-out the lift. The converse of this is to lead with the knees (bend the knees first) which will have the effect of putting the weight forward of our mid-line while causing the body to sacrifice the lumbar arch and rounding our back in order to maintain our grip on the bar.

Posterior Pelvic Tilt
At the other end of the spectrum, we have movements like push-ups, handstands/handstand push-ups, and kipping, to name a few, which benefit from tucking the pelvis under into a posterior pelvic tilt in order to eliminate the lumbar arch and create a slight rounding in the lower back. In this position, the posterior pelvic tilt, the top of the pelvis is tilted backwards and the bottom forwards (again using our bucket of water image, we’d now be spilling water backwards onto our heels).


Tucking our hips to create that posterior pelvic tilt helps stop us from over-arching the lower back. During push-ups, or really any plank position, this keeps us from sagging in the middle. In kipping, it allows us to create a more stable rhythm, as our kip is then based on the movement of the hips rather than the swinging of the legs. 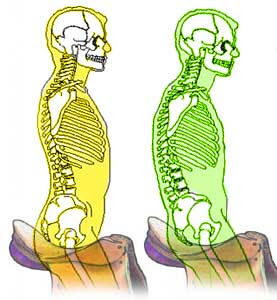 This is a great comparison drawing of a neutral pelvis at left in relation to a pelvis with posterior tilt at right and the resulting hollow position. Apparently Posterior Pelvic Tilt has carry-over to horse riding, as I borrowed the above photo from a dressage web-site.

The In-Betweens
Note that some movements, like overhead pressing, require us to squeeze our glutes and tilt the pelvis forward in order to avoid over-arching our backs when the weight is overhead. In other words, we are actually using a bit of posterior pelvic tilt in order to maintain the lower lumbar arch while creating a more stable spinal position when holding weight overhead.

To help everyone understand these concepts and put the particular positions into practice, Tuesday night’s Tabata workout consisted of 4 exercises all of which prominently featured the hip and hip position. 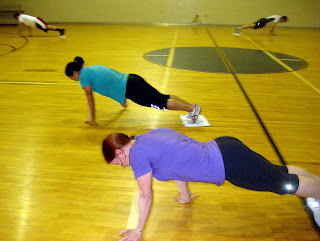 Mummy Crawl: Get into a plank position (arms extended) with feet on a towel, and then using only your arms, drag yourself across the floor. The emphasis here is posterior pelvic tilt (hips tucked forward) and a tight core to stop the body from sagging towards the floor. 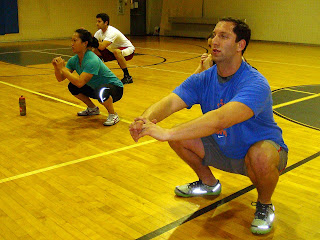 B2B Squats: squats are a normal tabata exercise, but the B2B version (Bottom-to-Bottom, meaning you hold the bottom squat position during the 10sec rest) really drives home the need for that anterior pelvic tilt at the bottom. Without it, the pelvis will actually tilt under, causing the back to round. This is bad at body weight, but can be devastating with a loaded barbell. 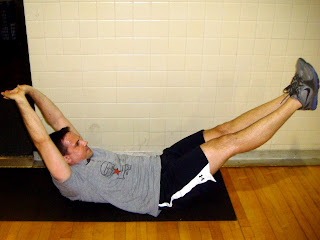 Hollow Position: The “push-away” portion of our kip, the hollow position is the quintessential posterior pelvic tilt exercise, as failing to tuck the hips up/forward will result in the lower back peeling away from the floor, defaulting back to the natural lumbar curve. Pulling the shoulders off the ground during the hollow position helps to maintain the rounded position and completes the rocking chair shape. 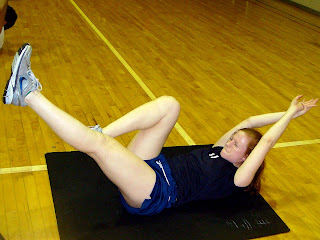 Appropriate scaling for the hollow position is to pull one leg in towards the chest, in order to make tilt the hips forward easier. This is opposed to simply bending the knees slightly and raising the feet higher, which does flatten out the low back, but also presses the pelvis flat, turning the movement into a crunch-hold.

By jumping our feet close to our hands and landing in a squat position, we transition from the push-up to the jump in one move. The alternative is to jump the feet up a little, push off the ground with our arms, and then right ourselves the rest of the way using our lower back. The former is not only more efficient, but clearly better posturally, helping to keep better spinal position through-out the burpee. This efficiency translates not only into faster burpees, but will also allow you to maintain better form when said burpees are pared with a lift (e.g., deadlifts). To prove the point, we gave everyone a 5 minute break before putting this theory into practice with a quick 20 burpee finisher. 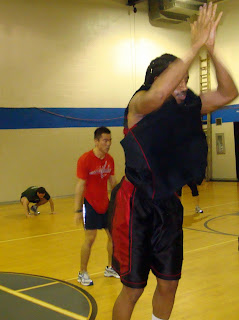 Great work – saw a lot of self-induced form correction during the workout, which was exactly the point. It’s a lot of information to be digested, but well worth the time to ensure that we function better as athletes. Now, go polish off some left-overs and get ready for Thursday.