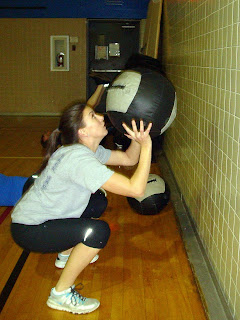 After our little dressage reference on Tuesday, I thought the title of today’s post was pretty appropriate, especially considering the start to Thursday’s programming.

After the warm-up, which paid specific attention to getting our respective scaps warm and mobile, class reviewed the two extreme positions of the kip – while still on the floor.

Hollow Position Review: Shoulders up with the hips tucked forward and low back pressing into the floor to create a rocking-chair shape while on your back.

Arch/Hyper-Extension Position Review: Shoulders up and thighs raised with the hips tucked back and abdominals pressing into the floor to create that same rocking-chair shape while on your stomach.

After reviewing each position, class then took to the pull-up rig to re-create these same two positions while hanging from the bar.

Check out this same progression, along with accompanying pictures, when we ran through it at the beginning of November. Skill review over with, it was time for the day’s fun. 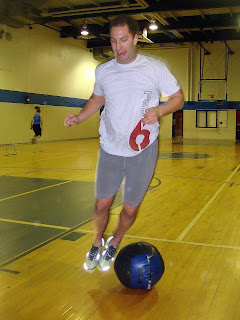 Stay with me for a second, as I walk you through the progression of how this workout came to be:

and thus was born the amalgamation that was dropped on class for Thursday: 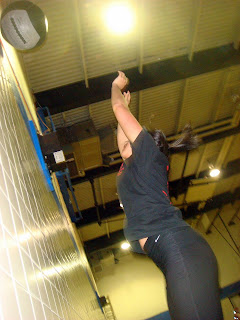 It’s not often that wall balls show up in our workouts in such high numbers, but there is definite value to this approach. Anyone who has ever done “Karen” in it’s original form knows how much endurance, both cardiovascular and muscular, that’s required to do high reps of wall ball in any time domain. Maintaining good form throughout the movement is key. Keeping the ball high on the chest (like the front rack of the front squat) while keeping our weight on our heels from top to bottom of the squat will help delay muscle fatigue by keeping us as efficient as possible throughout the movement. Yes, I realize, it’s relatively easy and straightforward to say, but another thing entirely to perform during 150 reps.

Speaking of straightforward, the whole point of this sideways-version of Annie is to avoid going straightforward…literally. A lot of exercises require us to move in a linear fashion. That is, forwards and backwards. Our goal Thursday night was to add both (A) lateral motion (the side hurdles), and (B) trunk rotation (the windshield wipers) to the workout. 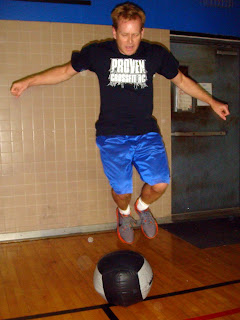 Lateral motion aids in developing our kinesthetic awareness (sensing where our body is in space). It’s this awareness that tells us where the box is for box jumps and how high we need to jump to land on it. It also tell us where the hurdle is, and how high and far we need to jump to clear it. To gauge your level of kineshetic awareness, ask yourself this question: where were you looking last night when hurdling? Were you looking straight ahead, “feeling” your way over the hurdle, or were you looking down at the hurdle to make sure you cleared it each time? The first builds kinesthetic awareness, which in turn helps build proprioception (the ability to control our body, and pattern our movements, and important ability when learning complex, compound movements such as the Olympic lifts). The second, looking at the hurdle, circumvents kinesthetic awareness. It also, in the case of the side hurdles, often causes us to break at the waist, disrupting our midline, making it even harder to control our bodies and increasing muscle fatigue.

Trunk rotation is especially important for building core strength. Any movement which utilizes trunk rotation demands balance and stability, mobility and flexibility, as well as power. Of course, trunk rotation also adds power, via a strong core. Think of any sport, and you’ll find trunk rotation embedded in it’s foundation. Baseball is probably top of most people’s lists, with both throwing and batting, but there’s also tennis, soccer, lacrosse, hockey, martial arts, football/rugby, skiing, swimming, and even golf. The ability to keep the body stable through rotation allows us to impart more muscle capacity to whatever movement we are performing. In short, more power. Imagine discus throwers at the Olympics. Without a stable core, they would lack the ability to adequately control the pre-throw spin. Less control means a slower spin, and a slower spin keeps them from maximizing the power they put into the throw.

Apologies for another lengthy post with lots of information, but the intent is to help explain why we do some things; for instance, both the lateral movements and trunk rotation have clear carry over to our daily lives, which is the essence of ‘functional movements.’ Additionally, this is just another way for us to encourage all of you to seek out ways of adding such to functionality to your daily lives on your own. In other words, GO OUT AND PLAY! 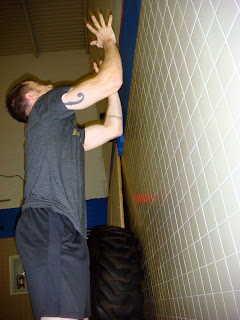 It was awesome to have John join us while he was in town from NY. John’s a true CrossFit journeyman, having worked-out at San Francisco CF (with the now infamous Kelly Starret), CF Oahu (from whence longtime CFDC-friend Katie Heinrich originally hails), and now CF Virtuousity.

Nice work everyone. Definitely a bit of a grinder, but really happy to see people push all the way through with good form (including quite a few self-assessed “no reps” – to quote Peter last night, “this new ‘no rep’ rule sucks!” Very true, but because of it, none of you will suck, and, really, isn’t that the point!?

Also, the date for the CFDC Holiday Get Together has been decided as December 18th (by way of the popular vote). If you got the evite, please be sure to RSVP; if you didn’t get the evite, please let Tom or Chris know so that we can add your address to the e-mail list as soon as possible. See you all on Sunday!