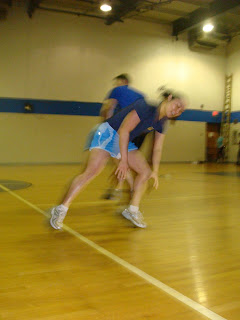 When is a grinder not really a grinder? Perhaps when you break it up into pieces and sandwich some rest in there.

For Tuesday’s purpose, a shuttle run equaled one round trip to mid-court and back.

Transitioning from the shuttle runs to wall walks demanded that everyone pay particular attention to their mid-line. Less than a month ago, we discussed the position of the hips/pelvis in movements such as handstands and handstand push-ups which “benefit from tucking the pelvis under into a posterior pelvic tilt in order to eliminate the lumbar arch.” The idea isn’t necessarily to round the back, but rather to stop the back from over-arching and make it easier to utilize the entire core to stabilize the spine. Check out the following series of pics as Eric performs one of his wall walks Tuesday night:

Specifically, check out Eric’s mid-line (mid-workout, no less); In each picture, representing different stages of progress up the wall, his core is tight with his pelvis clearly tucked forward into that posterior tilt. As a result, he’s able to walk his chest all the way to the wall without allowing his back to over-arch.

The mummy crawl distance was half that of the shuttle runs, so 1 rep equaled a trip to mid-court, and making it back to the end line equaled 2 reps. Scores for this block were reported as combined total of reps, however, those doing single skips had their scores divided by three for the round. 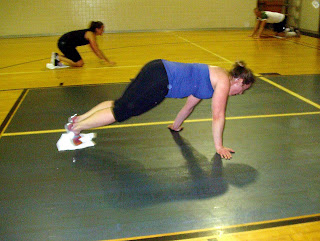 As it was with the wall walks, so it was with the mummy crawls: tuck the pelvis forward into that posterior tilt and really squeeze the abs and glutes. Keeping your mid-section locked into this position will keep the middle from sagging (over-arched back). This will also make performing the mummy crawl much easier; when the middle sags, more stressed is placed on the shoulders, making it extremely difficult to use the arms as propulsion. 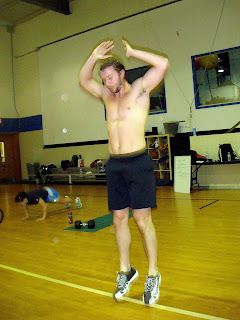 Burpees are burpees, and the DB G2OH was as straight forward as it sounds: take the dumbbell from the ground to an overhead position (knees extended, elbows extended, shoulder active and driving up). You could accomplish this by performing either a DB snatch or a DB Clean and Jerk. Weight for the single DB was prescribed as 20-30% of total body weight. Scoring was equal to number of reps completed with each arm – i.e., if you did 25 reps with your right, and 25 reps with your left, your score was for the DB G2OH was 25. However, the reps had to be even, so you if you got 25 with your right, but only 24 with your left, your score was 24.

After all was said and done, and the scores had been tallied up, there was an outright tie between Dan and Steph, each with a total rep tally of 390 reps – sadly, there was no time left for a face-off. Also, big shout out to Sara for using a 40lb DB for the G2OH! 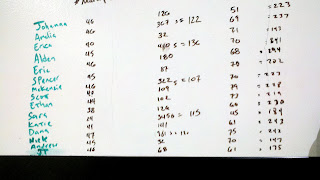 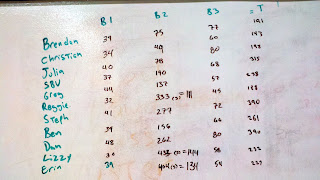 A tough workout to be sure. Awesome work all around, especially in really focusing on good form, and pushing the pace across all 3 eight minute blocks. Really impressive. Rest up, and we’ll see you all back on Thursday for what, I promise, will not be a repeat performance of Tuesday.