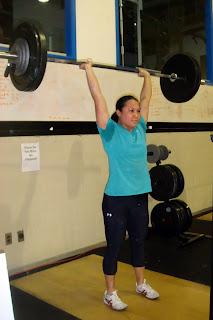 Julia’s birthday was on Thursday, and to celebrate, she decided to hit a PR split jerk of 150lb!

After another monster Tuesday, things slowed down a bit on Thursday. And of course, the best way to slow things down is to add weight!

We’ve been through the kipping progression a few times now, and with people making good progress, we’ll continue to revisit this same set-up:

– 1 x 5 Arch & Hollow Transitions (making a smooth transition between the two positions rather than holding, but still slower than a full kip); &

– 2-3 x Full Kipping and Kipping to Single Pull-Ups (this is where we speed up the arch and hollow transitions into a full speed kip. Those with at least 1 strict pull-up were allowed to do the kips and then a full kipping pull-up before coming back down and into three more kips. Those without a kipping pull-up stuck to kipping, trying to string together at least 5 to 10 smooth and controlled kips before coming off the bar). 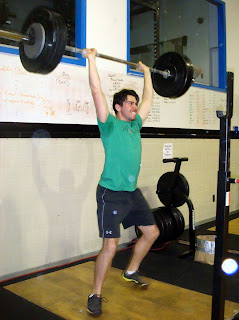 For those who have been practicing the jerk, we moved right on into 6 sets of 2 reps (with at least 1 warm-up set depending on the end goal weight). For those who are unfamiliar with the movement or haven’t practiced as much, we started with a quick review of the difference between (A) the strict press (no lower body movement), (B) the push press (dip & drive the weight into position overhead), and (C) the push jerk (dip & drive the weight, and then, before the weight is fully overhead, unlock the knees again and push the body under the weight).

Not so long ago, Coach Mike Choi put together a nice Points of Review of the Jerk, which I’m going to re-post here:

1) On the dip-drive, be sure that you do not drop under the bar so quickly that it creates separation between you and the bar. This kills any upward momentum. Instead, dip-drive as if loading a spring, lowering at a controlled (but not “slow”) rate before quickly reversing direction. The stored energy is quickly released on the upward motion.

2) It’s not a press up. Drive yourself aggressively under the bar with as much speed as possible. Don’t be so concerned with how deep to go. That depends on the weight relative to your strength and flexibility. Go as deeply as needed. This will take practice to find the best natural mix for your body. 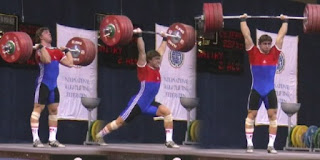 5) Demonstrate control before lowering (not dropping the barbell). Your hands should not release the bar until it’s past your waist. Only drop the bar if your body position is compromised or you’re in danger.

6) If dumping, be sure to push the bar gently in the direction it is falling and step in the opposite direction. Do whatever you need to do to get out of harm’s way, but generally a little push creates a surprising amount of space between you and the bar.

7) From the rack position, don’t fumble around too long. Set your hands, take a focused breath of air and do the jerk. It’s not being suggested that the lift should be rushed. But many people sit and hold the weight for long periods of time as it depletes strength.

To this list, I would add one more thing, which applies with equal effect to both the Push Press and Jerk: when dipping, push the knees forward to drop, as opposed to pushing the hips back. 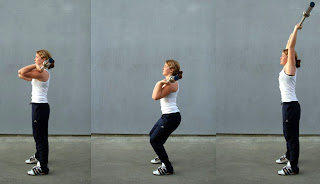 The first – knees forward – will allow to maintain an upright torso, with the weight held on (and then pushed by) the chest. The second – hips back – will often cause the torso to tip forward, causing the weight pull forward off the chest and into the hands. When the weight is moderate, you’ll be able to get it overhead, but often only after you’ve leaned forward and hyper-arched your back in order to get under the weight (or jumped forward to get back under it). When the weight is heavy, you’ll simply lose it out in front of you. The above photo set is a nice clear representation of the correct dip and drive position used in a push press, but check out the following photo set of Sage Burgener applying the same technique to the split jerk:

There was some last minute adjustments due to time and space constraints, but the effect was the same: mass body weight work being carried out by multiple people. 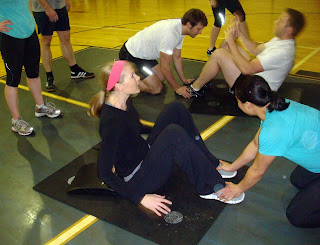 Awesome work. The kipping is looking great, and there are some people who’ll be ripping off kipping pull-ups before they know it. Don’t Forget: This Sunday is the CFDC Holiday Get-Together (3pm at Ben and Erica’s in Adam’s Morgan). If you have any questions, please e-mail Tom or I. Otherwise, be prepared to get your swole & sweat on Sunday morning in class and then make merry with the rest of your CFDC compatriots Sunday afternoon.