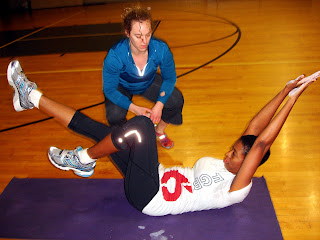 After a hell of a beatdown (and a hell of turnout) on Tuesday, things slowed down quite a bit for Thursday’s class. Instead of an all out push, the tempo was slow and concentrated, with the focus being on achieving and maintaining good form, especially through the mid-line of the body. 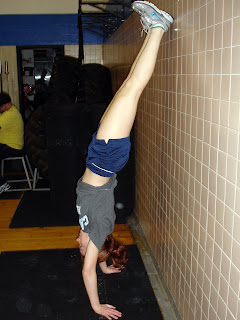 Deadlifts were Rx’d at 100-150% of body weight, but were limited to no more than 12 reps. Again, the focus was not on numbers, but on maintaining perfect form through out all 12 reps. Hollow position holds and handstand holds were done for as long as possible. Rest periods were for a minimum of 45 seconds (goal was to limit rest-periods to no more than 120 seconds if possible though).

This triplet really emphasizes the importance of postural control, especially through the mid-line, and it’s relationship among seemingly unrelated exercises. Maintaining proper posture in the deadlift get’s harped on by . But the every respected strength coach till they’re blue in the face. However, the need to control the lower back position isn’t a one-time deal, nor is it a one-way deal. Lower back and mid-section control isn’t just about creating and keeping the lumbar-arch position. If you don’t have enough control over your mid-section to keep your back from arching in the hollow position, or over-arching in the handstand, you probably won’t have enough control to keep it from rounding during a DL. 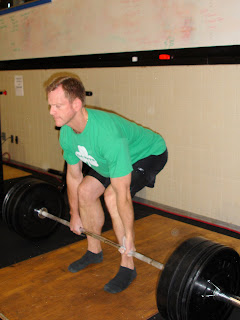 Part and parcel of the handstand is the hollow position. We’ve worked the hollow position and progression
quite a bit as of late, and while it may seem tedious and redundant, we’re seeing some really marked improvement in people’s form during movements which incorporate the hollow position. This includes kipping (for either pull-ups, K2Es, & T2B), push-ups, the dreaded mummy crawl, and of course, handstands. While class was definitely smaller on Thursday, check out how many people felt more comfortable trying out wall-facing handstands (as well as the resulting improvement in posture and positioning): 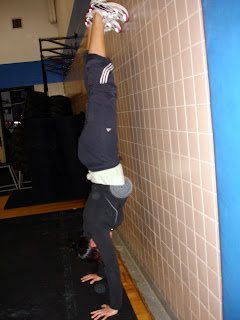 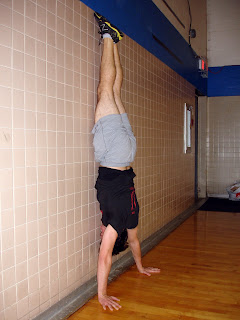 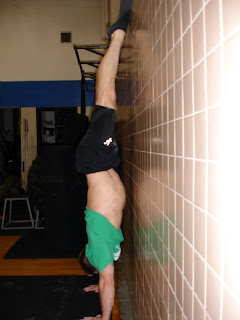 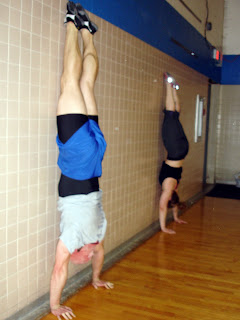 Slower pace, but just as much, if not more, to be gained from a class-program like Thursday (as opposed to Tuesday’s).  Here’s hoping each and everyone one of you have a great holiday weekend, as well as safe travels for all of you leaving the Metro-area.  Remember, Sunday’s class (Christmas day) is CANCELLED, and the gym will be closed Saturday through Monday. The regular schedule begins again Tuesday, December 27th. See you all then.