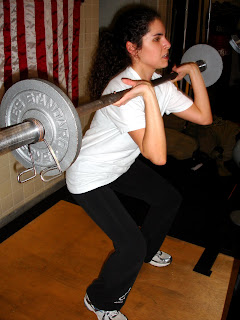 With the majority of the Holidays out of the way and classes back on schedule, it seemed appropriate to kick things off with some barbell work.

Just under 3 weeks ago, we went to some lengths in discussing the big keys for success in the front squat (flexibility and mobility) as well as the lead-off cue (initiate with the hips). Initiating with the hips starts the descent, and sets us up for better posture and control as we reach the bottom of the squat and ready ourselves to come back up. Appropriately enough, this time around we’re going to focus on the second big cue for the front squat: drive up with the elbows / drive with the elbows / drive the elbows up. 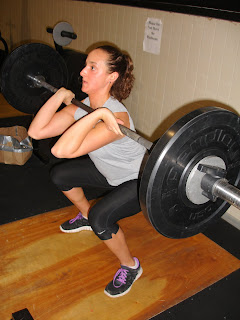 First, let’s look at the inverse of ‘driving up with the elbows,’ which is to cue on driving the feet into the floor and simply stand up with the weight (a decent cue for a heavy back squat); unfortunately, this will cause the hips to shoot up, putting the weight even farther forward in the front squat. When the weight shifts forward, the hands and wrists are now supporting the bar – not the shoulders – and the back will round over, with the neck often jutting forward, in an attempt to maintain the neutral position. In essence, we have created a slightly upright version of a bad deadlift, where the back is now doing the work to right the body and stand the weight up. Instead, initiate the ascent of your front squat by driving the elbows up first (in short form: “drive the elbows up”). 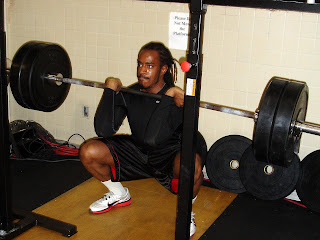 Starting with the elbows – instead of the hips – will keep the weight from tipping forward and allow the torso to stay upright, especially when standing with the weight. Preserving this vertical position, with the chest up and scapula back and down, is vital to finishing a heavy front squat.

Of course, the same positioning is true for other movements involving the front squat position, such as wall balls, cleans, and thrusters. So what do you imagine came next?

As programmed, each athlete had 8 minutes to see how high up the cluster/burpee ladder they could climb, adding an additional rep of each exercise with each additional round. Thus, the first rung was 1 cluster and 1 burpee, the second rung was 2 of each, the third three of each, and so on. The Cluster is a Clean and Thruster combo, and athlete’s had the option to either squat clean the weight right into a thruster, or perform a power clean and then thruster the weight. 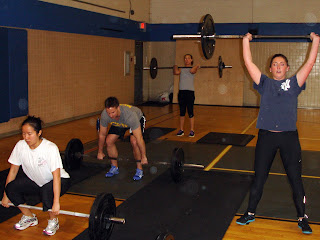 The thruster is an awkward marriage of front squat and push press, neither of which are simple to perform perfectly on their own, but infinitely more difficult when put together. This is because the ideal front squat uses a different elbow position than the ideal push press. The front rack position is hard enough, but in the thruster, a lifter must not only have a solid front rack, with the elbows up as high as possible, but must then be able to transition mid-lift into a solid push press position, where the elbows are only slightly forward of the bar with the hands gripping the bar.

It was great to see so many people raring to go after the short holiday break, and lots of good form to boot. Classes are back to their normal schedule, including both a 9am Elements and regular 10am class this coming Sunday (New Years Day). Of course, when I say regular, I mean regular only in the sense that it will be at the regular time; there just might be something special in the works for the first day of the New Year.

(1) Paleo Challenge – if anyone is interested in trying (or getting back on) a Paleo regimen, CFDupont is kicking off the New Year with a 30day Paleo Challenge beginning the first week of January. There will be pre- and post-measurements (weight and body fat), as well as a few prizes for those dropping the most body fat;

(2) Inner-Gym Competition – to conclude the challenge, any member of CFBalance, CFDupont, and CFDC is invited to participate in an inner-gym “Smackdown” to tentatively take place on February 4th. More details to come, but if you’re interested, please let Tom or I know;

(3) Crossfit Games Open Qualifiers – the Open kicks off at the end of February (a scant 9 weeks away!), and I highly encourage any and all of you to think about competing. We will be running all of the workouts at the gym, so you don’t have to worry about travel, crowds, etc. This is a great opportunity to take part in some great workouts and help encourage your fellow athletes. Again, if you have interest (or simply want to ask questions), please feel free to catch Tom or I.