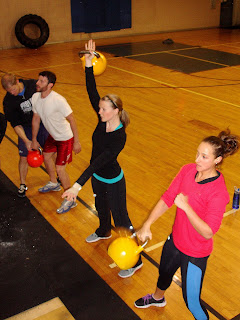 Apparently there were some raw hands after Thursday’s class? I honestly can’t imagine why – I mean, it was ONLY 25min of KB snatch progression practice followed by 8 minutes worth of AMRAP KB snatch…oh, and I guess we can include the additional 4 total minutes of games-style push-ups.

In all seriousness, the goal was to avoid the quads for a bit in a week of front squats, clusters, snatches, and, for those of you working out today, heavy back squats. Instead, we took a good portion of class to review the KB snatch before letting people loose on a KB snatch based workout. 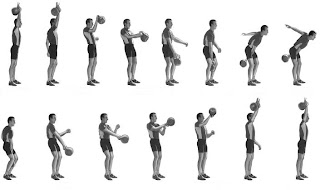 The above progression is taken from a Russian KB web page, and you can clearly see the KB rotating around the outside of the wrist as the model brings the KB down from the overhead position into the swing, and then repeats the same rotation in reverse as he swings the KB back overhead.
A few important points when performing the KB snatch:

NOTE: there is an alternative method which involves taking the KB straight up and punching through so that the KB doesn’t flop against the wrist. When executed properly, this can be effective, but sadly, it’s rare to see it executed properly, and most end up simply banging the ever-living-sh!t out their wrists as pictured above. We teach the rotating method because we believe it to not only be friendlier to the body, but just as efficient, if not more so. If you have questions, please don’t hesitate to ask. 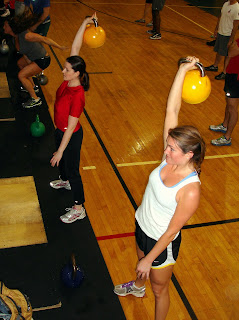 To help everyone grasp the KB snatch as discussed above, we used the following progression to step everyone through the movement Thursday night:

KB snatches can be tricky, and throwing technical movements like this into a workout isn’t an all the time thing. However, sometimes, it can actually help to reinforce a movement pattern, so long as the rest of the workout isn’t overly complicated or daunting. Thus, the KB snatches were paired with games-style, hand-release push-ups. 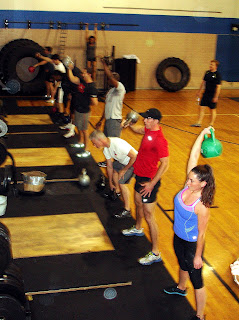 For the workout, the KB Snatches were scaled to 1-handed swings to allow athletes to concentrate on using the hips to generate momentum while keeping the shoulders pulled back and down to avoid rounding. Scoring was done Tabata-style, taking the lowest number of KB Snatches achieved with either arm (so, most likely, athletes were limited to numbers produced by their weak arm) and lowers number of push-ups.

It was awesome to see those new to the KB snatch start to get the hang of things as the workout carried on. Remember, it’s still about the hips: don’t get so caught up in the rotation that you forget to start moving the KB with the hip pop. Also, be mindful of your back position, as it’s easy to allow the shoulder to pull forward as you swing the KB through your legs, rounding out the back. 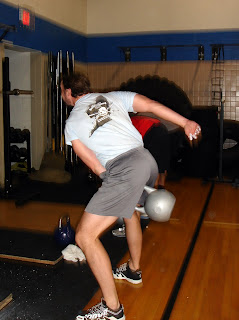 Sebastian showing some great form on the swing through.

REMINDER: There will be class this Sunday (both a 9AM intro/Elements class and a regular 10AM class). I would encourage all of you to dedicate yourself to coming Sunday morning, which will hopefully keep everyone smart Saturday night. Of course, if we don’t see you Sunday, Happy New Year!