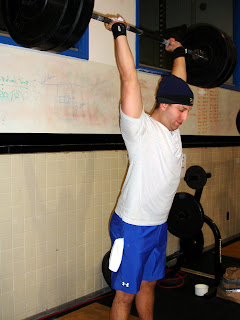 After a class full of skill-intensive movements on Tuesday, Thursday’s class saw the return of strength followed by a little more strength, followed by some balls-to-the-wall met-con fun.

After the general warm-up, athletes were instructed to take to the racks to find a 1RM push-press (no push-jerks) for the day, starting with at least one set of 7-10 reps on an unloaded bar, a set of 3 with a lightly loaded bar, and then at least three sets of 3 to get ready for some heavy overhead weight. 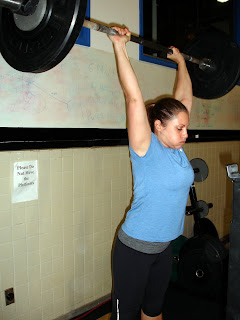 Less than a month ago, we posted a lengthy review on performing proper jerks. Although most of the review simply incorporated Coach Mike Choi’s Points of Review on the Jerk, we added one more point to the end which, as stated, applied “with equal effect to both the Push Press and Jerk,” and that was the need to push the knees forward during the dip portion of the dip-drive while keeping the torso as upright as possible. Pushing the knees forward, as opposed to pushing the hips back, helps to maintain the upright torso and will allow you to drive the weight with the chest (instead of pressing only with your arms – remember, we’re trying to impart momentum to the bar from our bodies). However, this comes with the caveat that we still need to keep our weight centered in our feet. 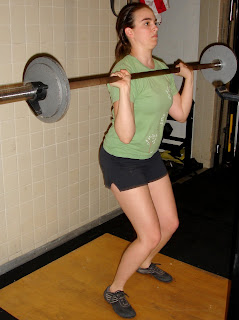 Whenever overhead lifting in class, it’s common to hear, among the grunts of exertion and shouts of encouragement, the coaching cue “from the heels.” So, does that really mean your entire weight should be rocked back onto your heels? No, of course not. Instead, this is simply a short two-word cue to remind lifters to keep their body-weight centered, rather than pitching forward on the toes. When a lifter shifts onto their toes, the heels will lift and most of the power generated from the dip-drive will be lost. Instead, by cuing a person to drive from the heels, the attempt is to get the weight of the body centered and thereby helps the lifter recruit the maximum power available from the glutes and quads. If you struggle to keep your heels down, often time simply lifting your toes up inside your shoes shortly before you begin your dip-drive can help to center your weight. 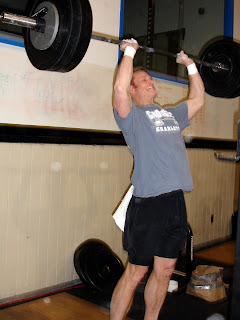 NOTE: driving from the heels does NOT mean that the heels will necessarily stay glued to the floor the entire time. Often times the heels will lift AFTER a lifter hits full extension. This is simply a result of momentum, and is not detrimental. Again though, the difference is that when heel lift is a by-product of momentum, it occurs after full-extension, not before.

Once everyone had found a 1RM for the day, the day’s programming called for a single set of AMRAP push-presses at 80% of the day’s 1RM. Time to break out the calculators. 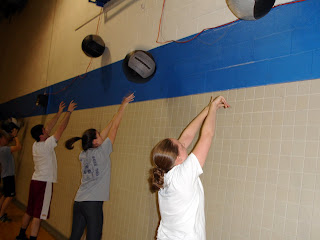 Rounds were run every 4 minutes, so the faster you finished, the more time you had to rest. The rest time may have seemed long, but that was sort of the point: sprint as fast as you possibly could through the 30 reps and then take a nice long break. In this manner, each round became an all out blast, rather than a slightly slower and paced 5 round effort.

Nice work everyone, especially considering the evening’s time-frame was somewhat thrown-off by the late basketball game. If you missed the announcements from Tuesday’s post, please take the time to go back and review them, and feel free to ask questions if you have any. See you all on Sunday.