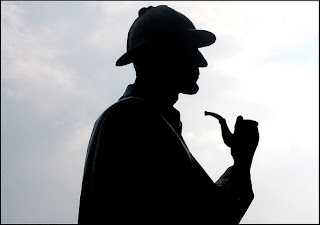 Yes, we had over 20 people in class again on Sunday. And yes, there was no met-con at the end. But no, that’s not what I’m going to focus.  Nor am I going to focus on the  fact that the 10AM class got a double dose of explosive movements followed by a little extra barbell strength work, although I’ll touch on that a little later. Instead, I’m opening today’s blog-post with a little discussion about the new and improved 9AM class.

A little over a month ago, we were noticing a distinct dichotomy in the people coming to the 9AM class: those who were there for their first time, and those who had been a few times (or even a few months), but still wanted some refreshers and help cleaning up some of the more complex movements. With this in mind, we decided to split the class in two separate, but somewhat complimentary pieces.

The first half remains an Intro class for the brand new and uninitiated. The second half of class has been restructured as the new Elements class. The purpose behind the Elements course is to review a few of the basic, but slightly more complex, movements in CrossFit and then showing how those base exercises translate into more complex lifts and movements. The Elements class is specifically meant for those who are still relatively new to CrossFit and need to take a little extra time outside of normal classes to focus on practicing some movements they may still be struggling with. The Elements curriculum consists of the following 3 groupings: 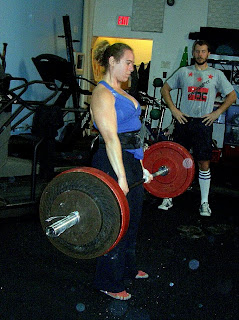 Although we’ve give through a few trial runs, Coach Sara took the lead this past Sunday for the first full-fledged class. Sara’s a great resource for us, having intimate knowledge of both the CrossFit and Olympic lifting realms, and it’s exciting to see her helping out in this capacity. Having run through the first grouping at least twice in the past month, Sara took Sunday’s Elements class through the second grouping of OHS and Snatch, with Steph and Sara teaming up to review some jump rope and double under pointers.

Class was a true success, and we’re excited to keep the rotation going. Next week we’ll be reviewing the Push Press/Push Jerk, Kettlebell Swing, and some kipping, but just to help everyone keep up, we’ll post the upcoming Element’s curriculum here at the end of the Thursday class blog-post. Two final notes, though: (1) there is no workout in the Elements class, and movements will be performed with little to no weight (this is a skill review class – a back to basics, if you will – which leads me to the second point…); and (2) the Elements class is for beginners, those who are relatively new to CF and struggling to grasp the set-up and execution of these movements – if you understand a movement but perhaps aren’t quite executing it perfectly yet, then Elements is not for you. If you’re not sure which group you fall into, please don’t hesitate to ask. 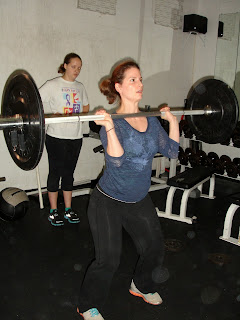 As stated above, the 10AM class was rocking with at least 23 people showing up for the day. After a involved warmup on the court, things moved back upstairs for the remaining 3 portions of class. 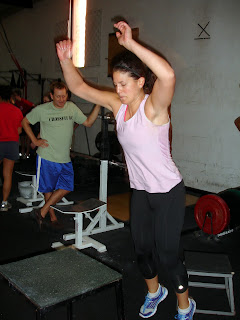 Starting in a seated position, where the tops of your thighs are at or just below parallel, lift your feet off the ground while leaning back slightly, and then quickly rock forward, slam your feet down, and explode off the box into a full vertical jump onto the other box. Remember to land light, absorbing your landing with soft knees. 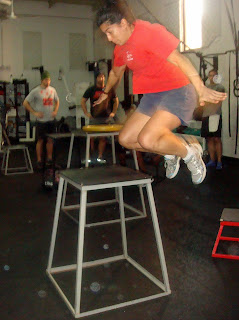 The big focus on Sunday was driving upwards as soon as the feet made contact with the floor – as opposed to allowing the feet to flatten out, the torso to lean forward and the butt to lift up from the box slightly, and then getting tensing up and getting ready to jump. 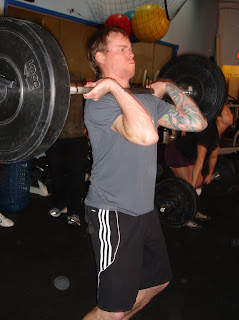 The goal was to warm-up to a weight that was 80% of your 1RM, and then, using that weight, perform 2 power cleans every 90 seconds for a total of 10 sets. With three people to a bar, this gave everyone a 3o second window in which to perform both of their reps – not a super tight window, but definitely not enough time to dawdle.

Class closed out with one practice warm-up set of alternating barbell lunges followed by 2 work sets at roughly 50% of each person’s power clean weight. Exact numbers for the lunges were left up to the individual, but the minimum was set at 8 reps per leg, and the maximum at 15 reps per leg. 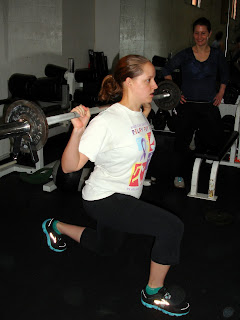 Great work as always, especially with the chaos and confusion of the Paleo Challenge kick-off taking place on Sunday. Sorry I missed everyone, but I do have to say getting coaching tips from Chris Spealler did go a little way to alleviating my sense of separation from the rest of CFDC. See you all on Tuesday.