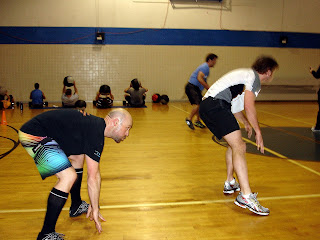 Back in early December, we ran class through a mash-up girl workout we dubbed KarAnnie Gone Awry, an obvious mix of Karen and Annie, but with one slight tweak: we swapped out Annie’s jump roping and sit-ups for side hurdles and supine windshield wipers.

Basically, we wanted to take a break from linear exercises – i.e., those that keep us in a straight line, forwards and backwards – and replace them with lateral and trunk-rotational movements. Tuesday night saw class revisit some of this same non-linear movements – some of it in a workout, and some of it just for fun in the warm-up. 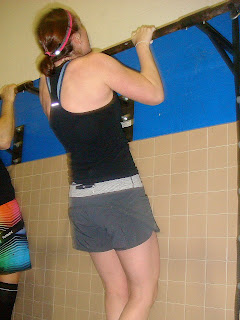 Everyone was given 20 minutes in which to continuously work at ascending a pull-up ladder: 1 pull-up the first time on the bar, 2 pull-ups the second time, then 3 pull-ups, and so on. Rest time was up to the individual (so, no on-the-minute type of workout), but, when failing to reach the next rung – for example, you made 4 but didn’t quite get 5 pull-ups – you had to start back at 1 again.

It’s fun, sure, but it’s also useful for getting people moving, and more importantly, moving in every direction. Sure you moving forwards and backwards, and side to side, but you’re also twisting, turning, bending, jumping, and, for a few people, rolling even. 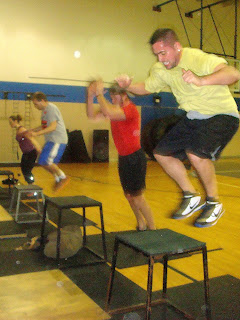 Five rounds, each consisting of 3 exercises which were done for 30 seconds of work, with 30 seconds of rest in which to rotate to the next exercise. No additional rest was provided between rounds.

Per usual, athletes were allowed one of the three options: Step Up, Step Down; Jump Up, Step Down; & Jump Up, Jump Down. Notice there’s no option for stepping up and jumping down? Pretty common sense if you think about it – if you don’t have the power and control to jump up on to the box, you certainly don’t have it for jumping down as there’s often more impact associated with athletes jumping back down off the box than on to it.

The side shuffles were done back and forth over a roughly 10m course, with athletes required to shuffle sideways (no turning the feet) to one line, with both feet passing over the line and both hands touching the floor, before starting back in the opposite direction. 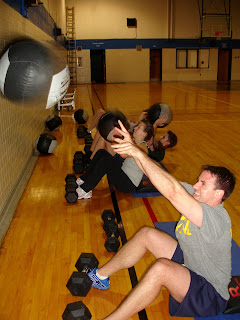 Med-Ball Throw Sit-Ups were done using ab-mats and with feet anchored roughly 3 feet away from the wall. To execute, each athlete began laying down with a med-ball of appropriate weight overhead touching the floor, and would then sit-up, lofting the ball from the overhead position against the wall and catching it before laying back down.

Excellent work.  Don’t forget, registration for inner-gym Smackdown on February 4th has begun! If you would like to participate and are not on a team, or your team needs another participant or two, feel free to post your request in the comments. More information can be found on the CrossFit Balance Smackdown page.